Return to Fordham Law School
You are at:Home»Law School News»Comply and Demand

In the wake of the 2006 economic crisis, the U.S. government called for a series of regulatory reforms, and big business listened. Although the business and finance world had been undergoing changes before the recent turmoil, widespread popular discontent accelerated developments. Broad measures have since been taken to ensure that risky decisions and shady deals stay out of the boardroom and the backroom. Steep government fines, new regulatory laws, and other penalties are holding banks and other companies more accountable in all their dealings. As a result, businesses now find themselves in the business of corporate compliance. 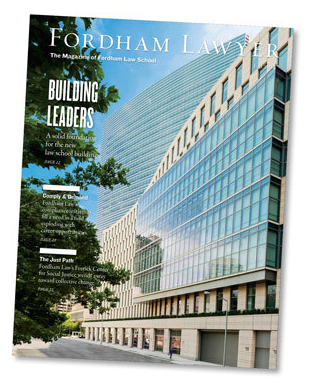 This story appears in the Fall 2014 issue of Fordham Lawyer.

Heightened government scrutiny means that companies are shoring up their compliance offices so that they can remain leaders in their respective industries. In a January 15, 2014, article titled “Compliance Office: Dream Career?” the Wall Street Journal reported that HSBC had added 1,600 compliance employees in 2013. The Financial Times called compliance “one of the hottest areas of financial recruitment” in its April 24, 2014, article, “The age of the compliance officer arrives.” The article also refers to a speech given by a Bank of England official who estimated that, as a result of European compliance requirements, 70,000 new full-time jobs would need to be created, while U.S. rules like Dodd-Frank would necessitate tens of thousands of compliance positions. JPMorgan Chase announced over 300 job openings for a team to assemble its compliance/anti-money laundering department. For many companies, especially banks, compliance is more than a public relations makeover; it is an entirely new way of doing business. Clearly, the demand for compliance professionals is great.

Fortunately, Fordham Law’s robust compliance program is helping to supply ethically minded legal professionals for the growing demand. Among the School’s initiatives is an LL.M. in Corporate Compliance, which welcomed its first cohort of students this fall. The degree program introduces Fordham Law students to the field that, according to Professor Sean Griffith, T.J. Maloney Chair in Business Law and Director of the Corporate Law Center, offers not only “employment prospects” but also “new challenges for development of the law.”

Alongside Fordham business professor Mario DiFiore, Griffith directs another of the School’s compliance initiatives, the Corporate Compliance Institute. The intensive, weeklong training program gives students a crash course on the fundamentals of compliance, with particular emphasis on financial sectors. Luncheons are held each day of the program, with a keynote lecture given by various compliance professionals.

The Institute offers a wide range of compliance-related courses, including Financial Crime, Frontiers of Risk Management, Internal Investigations and Crisis Management, and Developing an Effective Compliance Program. Students are able to build a portfolio during the program in order to highlight the training they have received.

Griffith, who also teaches Corporations and Mergers & Acquisitions courses, believes Fordham is especially well positioned to lead compliance programs because of the University’s “enduring values and commitment to ethics. Fordham is the leading institution of ethical performance in every area.”

“What Sean Griffith and the Corporate Law Center have built is truly remarkable and unique,” Mario DiFiore said. “You are not going to get that combination, with the Jesuit values built into our mission, anywhere else.”

Because of the ethical perspective the School imparts, Fordham Law students approach the compliance field with distinctive integrity. Adjunct Professor Carole Basri, who teaches courses on Global Corporate Compliance, Crisis Management and Internal Investigations, and Corporate Risk Assessment and serves as Corporate Compliance Advisor, also believes
Fordham’s program is particularly innovative due to the School’s forwardthinking curriculum. It doesn’t hurt, either, that the Law School is located in one of the world’s great financial centers.

“Fordham’s location in New York City is precisely where much of the compliance work is going on,” she said.

Compliance professionals are certainly reaping the benefits of the demand. According to theWall Street Journal, starting salaries for compliance officers have been rising 3.5% each year since 2011. Moreover, those officers with a law degree are generally in a better position to advance to the higher end of the pay scale; in some large companies this salary may figure at more than $200,000.

While compliance officers are no doubt well compensated, their responsibilities are complex and stressful, forcing officers to remain current with strict yet highly mutable regulatory systems of various governments.

Though no specialized degree is necessary to enter the field, degree offerings from law schools have helped hopefuls stand out as the demand has increased since the recent financial crisis. Furthermore, compliance officers rank higher on the corporate ladder. As a result of their stature, officers face major consequences when it comes to oversights or failures. One trade group’s 2012 survey reported that 60% of compliance officers had considered leaving their position due to the stresses of the job.

Fordham Law alumni who currently work in the compliance industry are well aware of the challenges of their positions; however, many of them credit the valuable critical thinking they perfected at Fordham as a tool they frequently use to succeed. Andy Hinton ’89, Vice President of Ethics & Compliance at Google, attributes his success in compliance to a fourstep process Fordham Law helped him master.

“Spot the issues, prioritize, come up with a response, and figure out a conclusion,” he said. “Even today, I have conversations with lawyers who struggle with that.”

Understanding how the multipronged process works is key to being an effective compliance professional, according to Professor Basri. “It’s not just issuespotting,” she said. “It’s important to be able to prioritize risk.”

Honoring this process at a company can allow for an effective and defendable compliance program. Moreover, it can help credibility when things get bad.

“Even if there’s a rogue employee responsible for bribery, prosecutors will take into account that you have an effective program, which necessarily includes the seven steps: written policies, procedures, and internal controls; reporting lines and compliance structures; background checks; training; a hotline system and auditing, monitoring, and reporting; discipline and incentives; and updating the program as well as risk assessment,” Basri said, citing the Justice Department’s declination to prosecute Morgan Stanley in 2012.

Though ethics is a crucial element in the field of corporate governance, Paul Washington explains the general public sometimes misunderstands the difference between a failure in ethics and one in governance.

“Ethics and compliance have to do with behaving in good faith and in the best interests of the organization,” said Washington. “If governance is weak, it can allow for compliance lapses, but sometimes people think there are ethical issues when there are actually only governance problems.”

The ability to differentiate between the two and make important judgment calls are just some of the skills Fordham Law students are developing thanks to the success of the School’s compliance courses. Washington, however, warns students against restricting their legal education to one particular field, even if it is a growing one.

“It’s helpful to take a wide variety of classes,” he said. “Effectiveness in and enjoyment of the job are enhanced by bringing a broader set of experiences. The more well-rounded you are, the much better you will be at compliance.”

Diversity is another benefit Washington spoke of when reflecting on his time taking evening classes at Fordham Law, which he described as a “broadening experience.” Flexibility and open-mindedness are other attractive characteristics for a student entering the compliance job market, which Eric Grossman adds can even be an advantage.

“Many successful people have come to learn that if you’re picking between someone with specific experience or someone with a broad range of skills, you often can do as well picking flexibility over someone with particular expertise,” Grossman said. He explained that some companies are more inclined to hire smart, well-rounded candidates who tend to be able to adapt to a changing environment rather than applicants who have developed narrow experience working in the same field.

According to Griffith, communication skills are also important.

“Compliance work involves communicating with all employees and designing structures that allow information that surfaces in the employee level to reach decision-makers,” he said.

“Students who perceive themselves as being a good judge of human behavior are often drawn to fraud and forensic investigation,” she said. “They view being a financially and legally trained ‘detective’ as very exciting.”

Ultimately, the ability to do a compliance job successfully can benefit more than just a business. Paul Washington points out that, in addition to providing a respectful work environment, a diligent compliance department can create a positive ripple effect that goes beyond the walls of the company.

“A well-run, well-managed ethical and compliant company helps to enhance the community,” he explains. “It can set a new standard.”

It is for this very reason that Andrew M. Calamari ’85, the Regional Director of the New York office for the Securities & Exchange Commission, believes compliance departments “need a meaningful say in how things are done.”

Luckily, Fordham is ahead of the curve. Mario DiFiore is quite confident that Fordham’s successful fusion of the business and law—what he calls the “secret sauce of compliance”—has set a precedent for ethics in compliance that will resonate outside Fordham.

“For a real values-based university like Fordham in the heart of the business and financial capital of the world, I think it is just in our maroon DNA.”