In accepting the Fordham-Stein Prize, Holder spoke hopefully to the 150 alumni, faculty, colleagues, and friends gathered at the event, four days after terror attacks in Paris. “Some would just despair, but in times of national stress, lawyers are often at their best,” he said.

“Studies have shown that lawyers are disproportionately responsible for the greatest advancements in the past decades,” Holder said. “Wherever you are and whatever you do, you have the power to serve, so find the time, the program, or the cause to serve your fellow citizens and improve their lives.”

Joseph M. McShane, S.J., president of Fordham University, praised Holder as an inspiration and a lodestar for the United States.

“We’re not just honoring you for your achievements, but for your principles, your great heart, your devotion to justice and your willingness to ask and answer the deep, unsettling questions that challenge our society,” Father McShane said. “For us, you continue to be part noodge and part prophet, as you show us how to live our lives marked by a noble purpose.”

Fordham Law Dean Matthew Diller made clear the reasons Holder was a perfect fit for the award, first given in 1976.

“Mr. Holder has always said the Attorney General’s job was never about winning cases or gaining leverage, but about achieving ‘just ends’,” Diller said, citing some of Holder’s advancements during his six-year tenure at the Justice Department, including efforts to protect the Voting Rights Act, release nonviolent drug offenders from prison, and prosecute terrorism cases in federal court.

“In late September of last year, Mr. Holder formally announced his resignation as attorney general, but made it abundantly clear that he was not resigning his commitment to his—and his country’s—values,” Diller said. “He said, ‘I will leave the Department of Justice, but I will never—I will never—leave the work. I will continue to serve and try to find ways to make our nation even more true to its founding ideals.’” 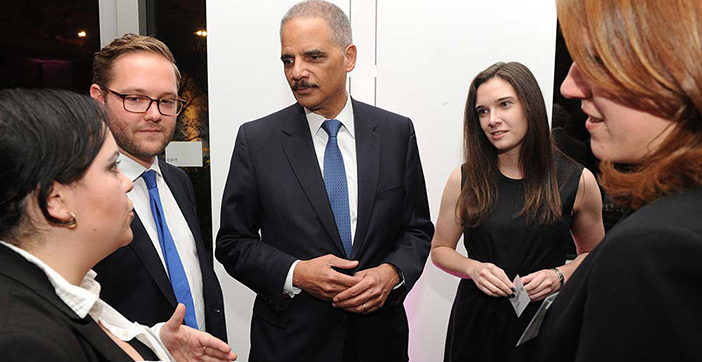 Before the dinner, Eric Holder spoke with Fordham Law students in the Stein Scholars program.

Holder, the 82nd U.S. Attorney General, was appointed by President Barack Obama in January 2009 and became the first African-American man to hold the office. He left in April to return to private practice at Covington & Burling in Washington, D.C., where he represents such clients as Merck and the National Football League.

The Fordham-Stein Prize is presented annually to a member of the legal community whose work embodies the highest standards of the profession. Prize recipients exemplify outstanding professional conduct; promote the advancement of justice; and bring credit to the profession by emphasizing in the public mind the contributions of lawyers to our society and to our democratic system of government.