Judge Guido Calabresi, whose legal scholarship revolutionized the field of torts and helped form the foundation of an entire area of study called law and economics, was honored with the Fordham-Stein Prize at the annual Stein dinner on October 13. Approximately 140 Judge Calabresi admirers, including many of his judicial colleagues from the United States Court of Appeals for the Second Circuit, gathered at the Law School to honor a man who generally eschews professional honorifics. 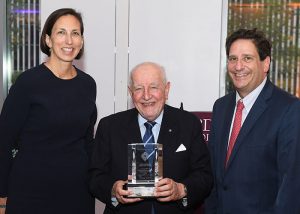 “The first thing to understand about Judge Calabresi is that no one calls him that,” said Dean Matthew Diller. “He is known, plainly and simply, as Guido. … Only a few people throughout history have been able to pull off a successful mononym, and none of them—not Madonna, not Cher, not Plato—compares to Guido.”

After clerking for Supreme Court Justice Hugo Black, Judge Calabresi joined the Yale Law faculty in 1959 and two years later became the youngest-ever full professor at the school. In 1985, he became dean and helped turn a financially shaky Yale Law into a well-funded, national powerhouse. Judge Calabresi was appointed to the Second Circuit court in 1994.

In his remarks following his acceptance of the prize, Judge Calabresi spoke about how his academic pedigree informs his judicial behavior. He defined the term “academic judges” to describe scholars like himself who are later elevated to the bench. 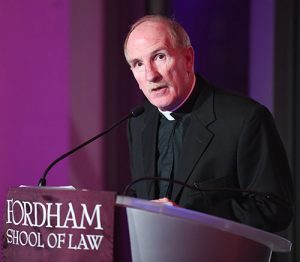 In his welcome, Joseph M. McShane, S.J., president of Fordham University, called Judge Calabresi “a man of conscience, competence, and compassion, who is and who has always been a point of light in our world and who shows an affirming light that leads and inspires all of us.” Photo by Chris Taggart.

As the Sterling Professor Emeritus of Law and Professorial Lecturer in Law, Judge Calabresi still teaches a course on torts at Yale Law every semester. His 1970 book The Cost of Accidents transformed the study of torts from a fault-finding venture into a strict-liability enterprise. Scholars have said that this publication and other torts scholarship by Judge Calabresi contributed to the development of no-fault insurance.

A widely beloved figure who is known as much for his personal warmth and compassion as he is for his intellectual output, Judge Calabresi was alternately playful and serious in his comments at the dinner.

“To come up with crazy ideas—that maybe is the most fun that I have as an academic judge,” he said. “To come up with ideas that are really strange and then to say, ‘Please brief these.’ But to know that these crazy ideas are to be thrown out, to be made part of a discussion, and then often to be ignored.”

At the end of his address, Judge Calabresi, who had earlier in the day met with Fordham Law students to answer their questions about his career and the federal judiciary, sounded a heartfelt note of gratitude for the praise he had received about his lifetime of achievements.

“I am particularly happy about the things you all said about me because I try to do that and to do it in a way that respects the values that a place like this, whose values I share, embodies in all that it does,” Judge Calabresi said. “For that, which makes this evening for me one of the truly great evenings of my life, I thank you more than I can say.” 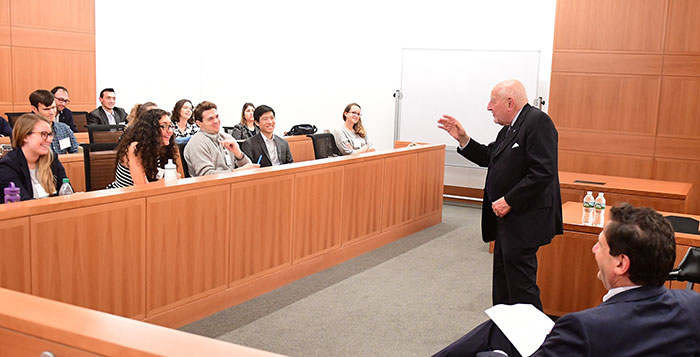 Before the dinner, Judge Calabresi met with Fordham Law students to answer their questions about his career and the federal judiciary.