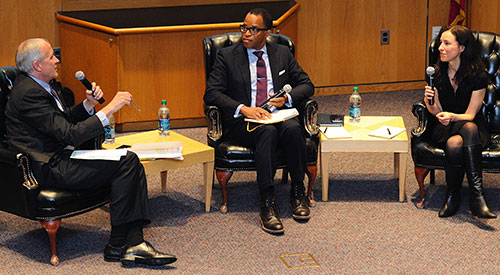 David McCraw, assistant general counsel for The New York Times, Jonathan Capehart of The Washington Post, and Amy Davidson of The New Yorker participate in a panel at Fordham Law School on Edward Snowden’s future. Photo by Dan Creighton

On a day surprisingly full of news about Edward Snowden, Fordham Law’s Center on National Security and PEN American Center added to the conversation on Jan. 23 by hosting a debate on the fugitive’s future.

The debate took place within hours of Snowden’s live Q&A on the website www.freesnowden.is, in which he directly addressed the question “Under what conditions would you agree to return to the U.S.?”  His answer: “The 100-year old law under which I have been charged . . . was never intended to be used against people working in the public interest, and forbids a public interest defense. This is especially frustrating, because it means there’s no chance to have a fair trial—and no way I can come home and make my case to a jury.”

Conditions for Snowden’s return to the United States emerged as the primary focus of the evening’s discussion. Coincidentally, earlier in the day politicians from both parties began to seriously consider negotiations, which some said should include clemency.

“We wouldn’t be talking about clemency if he hadn’t committed a crime,” said Davidson, who noted that “pardon, clemency, and plea bargaining are not terms that we have to invent for this case.”

But she also said “if we think there’s benefit [to]interrogating him, then Moscow is not the best place to have him.”

Capehart concurred that Snowden should return, but he was not warm to the idea of clemency, frequently repeating that the former government contractor must be held accountable. He said he had a hard time believing that there were not other channels available for Snowden to take the sensitive information—rather than the press. He specifically suggested members of Congress.

As it stands now, Capehart said, the federal government doesn’t know what other information Snowden is in possession of, even though Snowden claims he has no other files.

“Shouldn’t we be concerned about what happened when he was in Hong Kong and in the airport in Russia? And what those respective government officials did?” he asked.

Davidson argued that going to a government official or congressman likely would have prevented a national conversation on the National Security Administration’s [NSA] overreach and illegal eavesdropping.

“If he’d immediately turned himself in, we wouldn’t have heard a word he said about [his]motives,” she said.

Panelists agreed that the 35-year prison sentence given to Chelsea Manning, the former Army private who released the largest set of government documents ever leaked, hovers over the Snowden affair. Davidson said that giving “slightly random young people” security access is just one of the many aspects of the case that suggests mismanagement on the part of the Congress.

“Congress failed and was failed [by the NSA]in terms of disclosure and oversight,” said Davidson.

Panelists also noted that President Obama himself had acknowledged in The New Yorker that “legitimate policy questions” have been raised by the Snowden leaks. But the president questioned whether “giving some 29-year-old free reign to dump a mountain of information” was the best way to start the conversation.

“[True], the NSA has compromised the Constitution, but more importantly they’ve been clumsy,” she said. “And that’s good to know.”

View a video of the panel discussion.