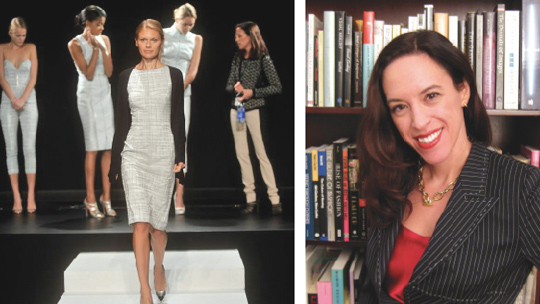 Just three years after it was launched as the world’s first fashion law center, the Fashion Law Institute at Fordham has enjoyed exponential growth within the legal community as well as the sartorial world.

What started as an innovative idea of Fordham Law professor Susan Scafidi—to create a special field of law for those working within a distinct industry—has gained respect within academia and is establishing a long-term direction for the industry. Since its launch in September of 2010, in fact, similar programs and courses have been launched at other institutions, including Loyola Law School in Los Angeles and New York University. (That irony is not lost on Scafidi, who is a pro at spotting a designer knockoff and who blogs at a site called counterfeitchic.com.)

“It’s been a real supernova,” said Scafidi, who also acts as the institute’s academic director. “We just keep managing to break new ground.”

Created in 2010, the nonprofit not only serves as a center to educate lawyers with a focus on fashion, but is “about something more,” Scafidi says—providing the fashion community with legal advice, training programs, and information about industry issues.

But it wasn’t an easy walk in this lawyer’s Manolos. Nearly 10 years ago, Scafidi’s idea to found the institute and the field of fashion law was ridiculed, with endless comparisons to Elle Woods in Legally Blonde.

“When I started this, people laughed. They said, ‘Really? It’s too girly, too frivolous. No one will take you seriously.’ It was like fashion law had a question mark after it,” she said. “But it is a multibillion-dollar industry… one that touches all of us, quite literally.”

In 2006, Scafidi convinced Fordham Law School to offer the first-ever fashion law seminar, under the condition that at least three students register. Much to everyone’s surprise, students frantically signed up.

“But we always realized it was more than just a class,” said Scafidi.

In just one year, enrollment doubled. It also became apparent to Scafidi that those outside of law school also needed services and that the industry needed legal protection and education.

Thanks to backing from the Council of Fashion Designers of America (CFDA) and the support of CFDA president and iconic designer Diane von Furstenberg, the center became a reality on the same day in September 2010 that New York Fashion Week moved to its new home at Lincoln Center, just across the street from Fordham.

Since then, the institute has continued to expand, solidifying a permanent track at Fordham Law, now with seven classes ranging from Fashion Ethics, Sustainability & Development to Fashion Law & Finance, and bridging the gap between the fashion and legal communities.
“Everything happened because there was a need,” said Scafidi.

The nonprofit institute has now extended beyond Fordham, evolving into a fashion law epicenter with a monthly legal advice clinic called a “pop-up”—a nod to retail pop-up stores—where designers are paired with volunteer lawyers who are assisted by law students. There’s a summer Fashion Law Bootcamp (now in East and West coast editions thanks to a partnership with Levi’s®) and countless symposia open to lawyers and fashion professionals. The institute’s next daylong event is slated for this April 4.

The institute has become a regular fixture on the semiannual Mercedes-Benz New York Fashion Week calendar, where it offers students more than just a look at the business of fashion law—that is, real-life experience working with production legalities. At last September’s Fashion Week, the institute celebrated its third anniversary with a fashion show to showcase designers who participated in its clinics. One of the clinic’s designers, Eden Miller of Cabiria, made international headlines by showing the first-ever plus-size line under the tents.

During this spring’s Fashion Week, which runs from Feb. 6 through 13, the institute will host a Feb. 7 discussion of the latest fashion trend: wearable technology.

Scafidi has inspired fashion law committees at several New York bar associations and encouraged the establishment of three specialty law firms by program participants—one each in New York, London, and Paris. She helped found the Model Alliance and create a monumental state law protecting underage models, a law that took effect last November and which requires better adult supervision of child models on the job.

“I’m so proud of getting that law passed,” she said. “It’s wonderful to be able to help models who are the faces of the industry actually have a voice in the industry.”

With New York conquered, Scafidi is taking her idea global, having attracted students and program attendees “from every continent except Antarctica.”

“We’ve done a lot, but we’re not done yet,” she said, adding that she hopes to “continue establishing fashion law around the world”—with Milan, Hong Kong, and Dubai next up.