The most humble man at Fordham finally got his due.

John D. Feerick, aka “St. John the Good,” was feted by alumni, faculty, and friends on April 2 at a raucous, standing room-only ceremony in the McNally Amphitheatre. 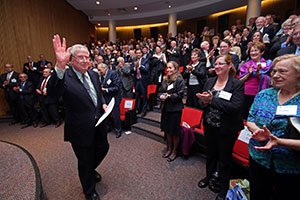 John D. Feerick was serenaded by a standing room only audience. Photo by Bruce Gilbert

Professor Feerick served as Dean of Fordham Law School from 1982 to 2002 and is currently the Sidney C. Norris Professor of Law and the Founder and Senior Counsel to the Law School’s Feerick Center for Social Justice.

During his deanship the Law School saw many advances, including the following:

Professor Feerick is the author of 5 books—one of which was nominated for the Pulitzer Prize in history—as well as numerous articles, papers, and presentations. He was a draftsman of the 25th Amendment to the U.S. Constitution.

He served as President of the New York City Bar (1992–1994) and chaired several statewide commissions while serving as dean. Prior to joining the faculty, he was a partner at Skadden Arps Slate Meagher & Flom, where he was an attorney from 1961 to 1982.

The occasion was the unveiling—23 years after its creation—of an official portrait of Feerick, who was dean of the Law School from 1982 to 2002. It was the first time the painting had been seen in public since it was created in 1991 by artist Franklin Petersen.

Petersen had been commissioned by Feerick to paint portraits of law school professors as part of the University’s 150th anniversary, but when asked to sit for a portrait himself, the famously humble Feerick declined. So Louis Stein ’26, for whom the schools’ Center for Ethics and Public Interest Law is named, asked Petersen to surreptitiously observe Feerick in meetings and paint one of him.

When he discovered it, Feerick instructed his staff to lock it in a closet.

On April 2, William Michael Treanor, Ph.D., who succeeded Feerick as dean, joked that Michael M. Martin, the current dean of the Law School, had many successes, but he was most envious of Martin for finally getting Feerick to relent.

“I heard about this picture. I never saw it. I didn’t talk to anyone who had actually seen it. I talked to some people who knew of people who’d seen it. So it was like the Loch Ness monster of my deanship,” Treanor said.

Martin lauded Feerick, who graduated from Fordham College at Rose Hill in 1958 and Fordham Law School in 1961, for his willingness to “take thankless tasks that lesser mortals just wouldn’t touch,” such as chairing state commissions on governmental integrity.

“He is for Fordham and Fordham Law, the iconic ram, the man who summarizes in his life everything that we encourage students to be and to become, and he does it with effortless ease, because the inner man and the outer man are completely at one,” he said.

Feerick dedicated the award to his family. His parents, both immigrants from Ireland, would have been astonished to see this portrait, he said.

“We all grew up seeing ourselves in small black and white pictures, usually taken by my mother on the roof of the six-story apartment house where we lived in the Bronx. I still have her pictures, and I might indicate they also bear no resemblance to the person here.”

Working with students (now members of the audience) who once called him “Dean” was the greatest aspect of the job, he said.

“That is the greatest opportunity a dean has. There’s no greater joy than the privilege to get to know young students and to help them, as I was helped,” he said.