America is not only unprepared for another financial crisis but has not “figured out what caused the last one,” former Securities and Exchanges Commissioner Daniel M. Gallagher Jr. said during an October 30 symposium at Fordham Law School that sharply criticized the Dodd-Frank Wall Street Reform and Consumer Protection Act.

Gallagher’s remarks followed those of a trio of financial law experts, led by Fordham Law Professor Richard Squire, who differed on the economy’s ability to handle a crisis but agreed Dodd-Frank’s mandates would not prove helpful if such an event occurred.

The event, “Are We Ready For The Next Financial Crisis?” highlighted the forthcoming 2016 publication of Squire’s book Getting Ready for the Next Bailouts (Columbia Press). The book, Squire noted, provides correction on the false belief that banks did not pay back government bailouts in the wake of the 2008 economic collapse.

“A funny thing happened on the way to the fleecing of the American taxpayer,” Squire said. “Wall Street gave the money back with interest.”

The auto industry, by contrast, failed to repay billions in bailout money, the professor added.

Dodd-Frank represented a “misdiagnosis” on its authors’ and supporters’ part— that of banking insolvency rather than an emphasis on the liquidity problem that caused the fallout, Squire said, noting it was an anti-bailout bill that clipped the wings of the Federal Reserve to act as lender of last resort.

The best way to prevent another collapse, Squire said, would be to change the way subsidies are provided to the housing market. Gallagher, who stepped down as S.E.C. Commissioner in October after four years in that role, echoed Squire’s point later when he called Freddie Mac and Fannie Mae “two zombie banks” contributing to an unsafe housing bubble. 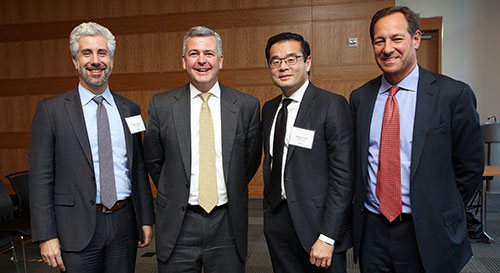 Gallagher spoke at length about Dodd-Frank’s failure to “address any of the root causes of the 2008 financial crisis,” calling the 2,319-page document that birthed it “one, big wooden nickel sold to the unsuspecting public.”

“Dodd-Frank created collateral consequences that are likely to only accelerate the next financial crisis, and certainly won’t prevent the next one,” Gallagher said, explaining the legislation’s 100 mandates gave S.E.C. workers 20 times the workload.

The bill also built on “a false narrative of U.S. greed and regulations failure,” Gallagher remarked, while ignoring the much larger illness: federal housing policy.

Eric Grossman ’93, executive vice president and chief legal officer of Morgan Stanley, predicted a financial crisis was less likely than before, due to increased capitol, liquidity, and more self-regulations, but that the industry as a whole was less prepared should one happen.

“Dodd-Frank, in the interest of an overheated political environment, robbed the federal government of an ability to act,” Grossman said, referring to questions over the Fed’s role as lender of last resort. “As a citizen, that scares me.”

Grossman took issue with the continued vilification of bankers who received bailouts. Squire’s book, he hoped, would help counter the popular narrative about the banking industry’s role in the economic collapse and its aftermath.

The day’s third speaker, Richard Kim, partner at Wachtell, Lipton, Rosen & Katz, expressed a measured response to the event’s main question, calling the United States “marginally better able to handle a financial crisis” than it was before 2008.

He did, however, question the wisdom of Washington’s decision, in the wake of the financial collapse, to push out veteran supervisors with Wall Street experience for younger, less experienced “technocrats” who specialized in crunching data. He also agreed with Grossman that the banking industry still unfairly bears the brunt of the blame associated with the collapse. He pointed to Attorney General Loretta Lynch’s increased focus on prosecuting banking crimes as an example.

The Fordham Journal of Corporate and Financial Law presented the symposium, which took place in the Skadden Conference Center. Prior to the panel discussion, Fordham Law School Dean Matthew Diller praised the Journal for being the most cited student-edited journal for banking and finance law. The Fordham Corporate Law Center co-sponsored the event.