The Hon. Raymond J. Lohier Jr. of the United States Court of Appeals for the 2nd Circuit delivered the Robert L. Levine Lecture at Fordham Law School on April 28.

Judge Lohier’s lecture, “The Court of Appeals as the Middle Child,” highlighted the role of appeals courts in the federal judicial system. Noting the rise of summary dispositions of appeals, Judge Lohier shared insights into how the Supreme Court’s shrinking caseload has increased the pressure on the federal courts of appeals.

“It’s said middle children are most likely to be forgotten in the chaos of family life. The same can be said for the court of appeals.”
–Hon. Raymond J. Lohier Jr.

The work of the appellate courts, celebrating this year their 125th anniversary, is not well known or understood by the American public, he noted.

“It’s said middle children are most likely to be forgotten in the chaos of family life,” said Judge Lohier, who was appointed by President Obama to the 2nd Circuit in 2010. “The same can be said for the court of appeals.”

Congress established the courts of appeals in 1891, at a time when the Supreme Court faced a three-year case backlog, in order to provide docket relief. Today, the courts of appeals confront critical issues of national importance and serve as the courts of last resort for 99.9 percent of appeals, Lohier explained. Their caseload has risen from 35,000 in 1987 to 55,000 in 2014.

This ballooning court docket has occurred as the Supreme Court’s caseload has dropped to around 70 cases per year, most of which focus on narrow constitutional matters. The 179 circuit court judges spread across 13 circuits have limited discretion in interpreting Supreme Court decisions when they convene in three-judge panels.

Judge Lohier suggested administrative solutions, such as summary orders, certifications of questions to state courts, and a voluntary dismissal program for immigration applicants, as ways the courts of appeals could control caseloads and provide judges more time to consider difficult cases. He described himself as an incrementalist invested in finding ways to solve actual problems before the court rather than problems “in our own mind.”

At present, around 90 percent of appeals before the 2nd Circuit result in summary dispositions. That number towers above the 58 percent in 1983–84 and 29 percent in 1969. 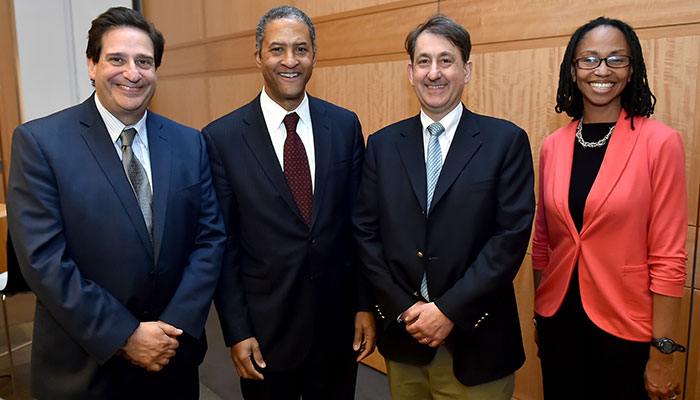 Certifying questions is a way in which federal courts of appeals can hand state supreme courts an unsettled question of state law, which state courts are better situated to grapple with and answer, Judge Lohier said. He added that this would save appeals judges time and resources. However, the 2nd Circuit certified only fifteen such questions in the last two years, the judge noted.

The 2nd Circuit has found greater case relief in recent years, instead, by remanding upward of 1,600 cases to the Board of Immigration Appeals (BIA) when the decisions would not impact petitioners’ rights, Judge Lohier said.

Since its inception in 1992, the Robert L. Levine Distinguished Lecture Series, supported by the generosity of the Laurence W. Levine Foundation, has attracted prominent speakers from the legal community. Past Levine lecturers include notable jurists such as Justice Sandra Day O’Connor and Chief Judge Judith Kaye and scholars such as Professors Louis Henkin and Randall Kennedy. The series namesake graduated from Fordham Law in 1926 and practiced law for 62 years. He and classmate William F. Walsh established the firm, Walsh & Levine, initially practicing theatrical law before expanding to a cross-section of commercial, banking, and international law.

The Fordham Law Review presented and sponsored the event and will publish Judge Lohier’s Levine Lecture.