Return to Fordham Law School
You are at:Home»Alumni»Voting in America: A Right or a Privilege?

Juan Cartagena, president and general counsel of LatinoJustice PRLDEF (Puerto Rican Legal Defense & Education Fund), spoke on October 27 at Fordham Law on the subject of voting rights in America, in a talk hosted by the School’s Feerick Center for Social Justice.

“We still condition the vote based not on the Board of Elections, but on the criminal justice system.”
– Juan Cartagena

Following an introduction by Fordham Law Professor Tanya Hernandez, Cartagena gave a talk entitled “Voting in America: A Right or a Privilege?” framing his thoughts on voter suppression with his own history working on voter advocacy within the Latino and African-American communities.

To explain the 1965 Voting Rights Act’s importance to the modern electoral landscape, Cartagena described the first case he co-filed once out of law school: a 1981 challenge to a New York City redistricting proposal that would have shortchanged the city’s Latino and African-American communities their fair share of New York’s City Council seats. Cartagena said that the Puerto Rican Legal Defense Fund team with which he worked succeeded in enjoining that year’s primary election in a suit that eventually wound its way to the Second Circuit, where it effectuated a complete reshaping of New York City’s electoral process.

Cartagena then went on to describe present-day challenges to the Act. He detailed ways in which voting rights have been curtailed, despite the bipartisan support they enjoyed even as recently as the presidency of George W. Bush. 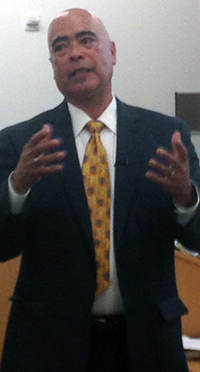 “The rules are being set so that partisan interests, because they happen to have the power at that time, can make it possible for themselves to continue winning,” Cartagena said. “How else would you describe what’s been happening with voter ID laws? And curtailment of early voting? And the undoing of Election Day registration in some states? How else would you describe that if it’s not just to win an election?”

Citing this July’s Fourth Circuit decision in NAACP v. McCrory, Cartagena argued that efforts to restrict the voting rights of ethnic minorities have in the recent past grown more brazen. Though the Fourth Circuit in that case struck down a set of restrictive voter eligibility laws enacted by the state of North Carolina, Cartagena pointed to the court’s opinion as indicative of just how aggressive North Carolina’s legislators had been in attempting to restrict minorities, predominantly African Americans, from voting.

Cartagena pointed to felony disenfranchisement, the policy of denying the right to vote to those convicted of a criminal offense, as the most pernicious form of voter suppression currently in practice in the United States.

“We still condition the vote based not on the Board of Elections, but on the criminal justice system,” he said. “The Sentencing Project just recently released a report that 6.1 million eligible citizens cannot vote two weeks from now in the presidential election because of felony disenfranchisement laws.”

A discussion of the upcoming presidential election formed the conclusion to Cartagena’s talk. He encouraged attendees to visit the NALEO Education Fund’s website, where they could register to vote, and also to download Latino Justice PRLDEF’s Cada Voto Cuenta election monitoring app, in order to help ensure equal access to the polls on election day.

Among those in the capacity crowd at Cartagena’s talk was former Fordham Law Dean and current Norris Professor of Law John D. Feerick ’61, namesake of both the classroom where the talk took place and the Center for Social Justice that sponsored it.