Return to Fordham Law School
You are at:Home»Centers and Institutes»Exploring the Cinema of New York’s ’60s Queer Underground

Cruz-Malavé presented material related to his critical essay concerning the 1967 film The Life, Death, and Ascension of Lupe Velez, directed by Puerto Rican filmmaker José Rodríguez-Soltero and starring New York Puerto Rican actor Mario Montez. According to Cruz-Malavé, Rodríguez-Soltero in his film artfully synthesized the ironic conventions of camp and the ecstatic fervor that many white queer underground artists of the time believed was fundamental to the character of Puerto Rican immigrants.

“Underground artists tended to idolize Puerto Ricans, but in a very odd way,” said Cruz-Malavé. “What they thought was interesting about Puerto Ricans was that they seemed to live in a world where commerce, sex, and religion were not quite fractured into separate spheres. So they thought that Puerto Ricans would be good subjects, but they also placed them on the other side of art.” 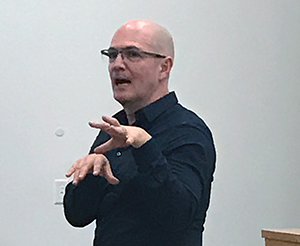 According to Cruz-Malavé, Montez and Rodríguez-Soltero play with, and often violate, these and other cultural assumptions of the underground, specifically those relating to race, gender, and ethnicity.

The film, 50 minutes in length, loosely retells the life story of Lupe Velez, a Hollywood star of the 1920s and 30s. Billed as the “Mexican Spitfire,” the real-life Velez met with uneven success in her career and experienced infamously volatile domestic relations. She took her own life in 1944 with a barbituate overdose.

In Rodríguez-Soltero’s fictionalization, the role of Velez is played by Puerto Rican drag artist Mario Montez, adding a subversive twist to a narrative that, according to Cruz-Malavé, violated the conventions of both the dominant white culture of the 1960s and the queer subculture of the Lower East Side.

“Camp,” said Cruz-Malavé, “and especially camp interpreted as ironic, becomes a shared language for the ability to reappropriate something—turning it, recycling it, and using it, but Montez and Rodríguez-Soltero added baroque fervor and belief to the mix.”

He argues that Lupe Velez simultaneously challenges the iconography of the Hollywood studio system and the cultural assumptions concerning Puerto Ricans in the 1960s New York City art scene. The Puerto Rican community of that time, Cruz-Malavé pointed out, had experienced multiple displacements, both within the city and without, which he believes influenced Puerto Rican filmmakers’ tendency to obscure boundaries altogether.

“The Puerto Rican immigrant subjects that white underground artists were looking at as unfractured, pre-modern, were people who had experienced, in their lives, multiple displacements,” he said. “First of all, many of them would have migrated from more rural communities to more urban communities. Then they would have migrated to New York, and then, something like 75 percent of the people who were displaced by urban renewal were Puerto Ricans.”

At home neither entirely within their adopted city, nor within the camp conventions of the queer underground, Puerto Rican artists, Cruz-Malavé says, used their works to express their unique rootlessness.

“Mario Montez is about irony and evasion and his own version of camp, which includes fervor and belief,” said Cruz-Malavé. “So what you need to do is, instead of reducing Mario Montez as a Puerto Rican to the subject of irony or fervor, you have to be able to see him serving his dual register, so that you can see his art.”

Cruz-Malavé’s talk was part of the center’s Colloquium on Race and Ethnicity.