Return to Fordham Law School
You are at:Home»Business and Financial Law»Fashion Frontiers

On March 31, the Fashion Law Institute at Fordham Law hosted its seventh annual symposium, bringing together leading figures from fashion and law for discussions regarding the trends shaping one of New York City’s most vibrant industries. 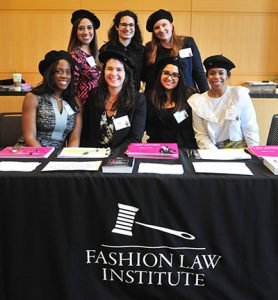 Lawsuits involving fashion and intellectual property have made big news over the past year, and Professor Scafidi began the first panel by noting that on the same day as last year’s symposium, the Supreme Court met and decided to grant certiori in Star Athletica v. Varsity Brands, a copyright infringement case involving cheerleader uniforms. The Fashion Law Institute filed an amicus brief in support of Varsity, the copyright holder, with panelist Michelle Mancino Marsh ’96 of Arent Fox serving as counsel of record, and the week before this year’s event the Court handed down a victory for Varsity.

“Last year I asked our panelists two questions: Will the Supreme Court take the case, and should it?” noted Professor Scafidi. “The answer was a unanimous ‘no’ to both questions—but we’re still cheering the result.”

Up next was a discussion of retail technology, moderated by Adjunct Professor Paula Barnes of Macy’s. A diverse group of panelists including Diana Bernal of Richemont, Daniel Plenge of Plural NYC, Janett Martinez of Loomia, Kenya Wiley of the Fashion Innovation Alliance, and Po Yi of Venable considered the relationship between “bricks and clicks,” reminding the audience that the success of both in-store technology and online interactions often depends on the human element.

“One of my favorite quotes from Elizabeth Warren is ‘If you don’t have a seat at the table you’re probably on the menu,’” said Wiley. “In other words, if you don’t want your business to be eaten alive in Washington, participate in the regulatory process.”

Wiley and her co-panelists offered several strategies for maintaining an active voice in the federal rulemaking process, emphasizing the importance of keeping a watchful eye on regulations posted to the Federal Register.

Another panel, again moderated by Trexler, took up the topic of international trade, which the Trump administration has turned into a fraught topic for anyone retailing goods in the United States.

“The whole concept of trade and politics getting involved is like making sausage: it’s not pretty but the end result is usually pretty good. So I think in the end everything will balance out,” said panelist Don Obert of the Obert Law Firm.

Co-panelists Anne Borkovic of Akin Gump Strauss Hauer & Feld, Marc M. Levey of Baker & McKenzie, Roberta Portella of RPortella & Associados, and Stephen Sidkin of Fox Williams expressed similar hopes that the markets would seek homeostasis, and also misgivings about some of the policies currently under consideration in the White House and Congress.

“[Paul Ryan] thought of his tax plan as a VAT [value-added tax], but it’s not really a VAT,” said Levey. “It’s something in between and it gives rise to enormous technical problems.” 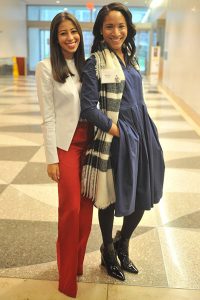 composed of Julie Fredrickson of Stowaway Cosmetics, Melissa Hall of the Emerging Designer, Christine Helm of the Fashion Institute of Technology, designer Nanette Lepore, U.S. Congresswoman Carolyn B. Maloney, and Gary Wassner of Hilldun Corporation discussed the fashion community’s vibrancy and the challenges it currently faces.

“In my role we commission a number of economic reports, and the report on fashion showed how tremendously important fashion is not only to the U.S. economy but to the economy of New York,” said Representative Maloney. “We actually generate nearly eight times as much income [from fashion]as Paris, and nearly ten times as much income as Milan.”

Lepore and Wassner said that despite the industry’s vibrancy, it faces challenges related to New York City’s shift away from its industrial roots.

“When I started my business in the 1990s I think 75- to 80-percent of the clothing that was sold in America was manufactured in America. Now, we’re lucky if it’s 18 percent. So there’s been a huge fall-out of our factories,” said Lepore. (Lepore’s estimate was optimistic; the current total is 2–3 percent.)

Both Lepore and Wassner championed the preservation of New York City’s Garment District, a 10-square-block section of Manhattan that until recently served as both the creative and manufacturing hub of the city’s fashion industry.

In closing, Lepore related an anecdote that epitomized the day’s intersection of fashion and law.

“I was recently looking for a new IP attorney and Susan Scafidi helped me find a really great guy,” she said. “I think that the network at Fordham and the fact that [Susan] was able to send me to three or four different people to meet was all wonderful. So I thank Fordham for that, and for the Fashion Law Institute.”