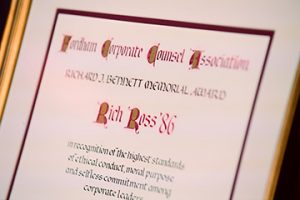 “During his extraordinary three-decade career as an entertainment industry executive, Rich has presided over numerous domestic and global television and film smash hits, helped launch the careers of a galaxy of early 2000s Disney stars, and mentored countless college students,” said Dean Matthew Diller. “Rich’s expert ability to clearly and thoughtfully communicate his vision, whether with his staff or with consumers, has proven integral to his success.”

During Ross’s tenure at Discovery Channel, the network has set records in a wide range of demos including millennials, core viewers, women, kids, and families, most recently delivering the highest-rated quarter ever in the first quarter of 2017 as well as the network’s highest-rated Shark Week telecast with “Phelps vs Shark.” Before joining Discovery, Ross served as CEO of Shine America, where he drove the ongoing commercial strategy of U.S. operations. He oversaw all aspects of production, distribution, and marketing of original programming across broadcast, cable and digital platforms, including such programs as MasterChef and MasterChef Junior and the Peabody Award–winning show The Bridge.

Ross had a successful career at The Walt Disney Company from 1996 to 2012, serving as president of Disney Channels Worldwide from 2004 to 2009 and chairman of Walt Disney Studios from 2009 to 2012. Prior to that, he worked at FX Network and Nickolodeon.

“I am a great example of how much a law degree can do — and that not all law graduates needed to work at a big firm,” Ross said. “I am so proud of what Fordham has become as an institution. For those of you who have been touched by Fordham, cherish it because it is a special place.”

The Monday following the dinner, Ross helped launch the Law School’s LGBTQ affinity group, which was inaugurated at a lunch hosted by Dean Matthew Diller, the Fordham Law Alumni Association, and OUTLaws, Fordham’s LGBTQ student group. Aside from his countless achievements in the entertainment industry, Ross made headlines for being Hollywood’s first openly gay studio chairman.