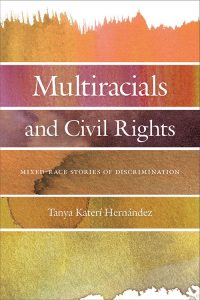 As the mixed-race population in the United States grows, public fascination with multiracial identity has promoted the belief that racial mixture will destroy racism. However, multiracial people still face discrimination. Many legal scholars hold that this is distinct from the discrimination faced by people of other races, and traditional civil rights laws built on a strict black/white binary need to be reformed to account for cases of discrimination against those identifying as mixed-race.

In Multiracials and Civil Rights (NYU Press), recently published on August 3, Professor Tanya Katerí Hernández debunks this idea and draws on a plethora of court cases to demonstrate that multiracials face the same types of discrimination as other racial groups do. Hernández argues that multiracial people are targeted for discrimination primarily due to their non-whiteness, and she shows how the cases highlight the need to support the existing legal structures instead of a new understanding of civil rights law.

Coming at a time when explicit racism is resurfacing, Hernández’s look at multiracial discrimination cases is essential for fortifying the focus of civil rights law on racial privilege and the lingering legacy of bias against non-whites, and it has much to teach us about how to move toward a more egalitarian society.

Kevin R. Johnson, dean of UC Davis School of Law, says, “Multiracials and Civil Rights is a ‘must read’ for anyone interested in sophisticated analysis of the use of the civil rights laws to challenge discrimination in the United States.

Taunya Lovell Banks, Jacob A. France Professor of Equality Jurisprudence at the University of Maryland Law School, says, “Multiracials and Civil Rights is an important contribution to the emerging literature about the post-Loving multiracial generation. This thoroughly researched book is a must read, the first legally focused discussion of whether current antidiscrimination law adequately addresses discrimination claims by multiracials.”

The book is available for purchase on the NYU Press website and Amazon.