The Fordham Law community is saddened by the death of alumna Margaret M. “Peggy” Hill ’64, who passed away on September 27.

Hill was the Law School’s own Broadway star. Involved in theater production for 30 years, she first began producing in the Hamptons, then off Broadway, and finally on the Great White Way. 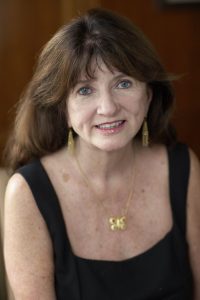 In 1988 she produced the first outdoor theater in Southampton (a revival of Talley’s Folly by Lanford Wilson). In the 1990s, she began producing Off-Broadway in New York City (Raft of the Medusa by Joe Pintauro; Marvin’s Room, winner of the Outer Critics Circle Award and the Drama Desk Award; and Oleanna by David Mamet, in New York and London). On Broadway, she produced The Rise and Fall of Little Voice, which was subsequently made into a movie starring Michael Caine, who won the Golden Globe Award for his role.

Other Broadway productions included King Hedley II by August Wilson (2001) and Frozen (2004). Both plays received four Tony nominations and each won a Tony Award. More recent productions were the David Mamet plays Speed the Plow (2008) and Race (2009), and The Parisian Woman (2017) by Beau Willmon.

Hill received her bachelor’s degree from Saint Mary’s College in South Bend, Indiana, and was later awarded an honorary Doctorate in Fine Arts by the college. As a student at Fordham Law, she served on the board of the Fordham Law Review. Following her law school graduation, she served as a law clerk to Judge Kenneth B. Keating of the New York State Court of Appeals. She then when into practice: first working in entertainment law at Greenbaum, Wolff & Ernst, and then corporate law at Gulf & Western. She also served as assistant counsel to the Commission of Reapportionment of the New York State Legislature. She also earned a Master of Laws degree from NYU School of Law.

In the late 1980s, Hill left legal practice to pursue volunteering, part-time projects, and to raise her two beloved children. During this time, she was serving on the board of a theater company in Southampton when an opportunity arose. They needed a volunteer to supervise the next production. Peggy nominated herself. She realized very quickly that she liked all the things a producer does, so over the next three decades she built a successful career in theater production.

When Hill wasn’t behind the stage, she was devoting her time and energy to serving her community. She was a co-founder of Angela House, which served as a transitional residence for young teenage mothers that provided them with a comfortable and safe environment for their infant children while they acquired the necessary skills for independent living. She also served on the boards of the National Theatre Workshop of the Handicapped and Pianofest and was a member of the executive council of the Irish American Historical Society.

Throughout her life, Hill remained dedicated to her law school alma mater. She made a generous leadership gift to name the Hill Faculty Conference Room in the new building that the Law School moved into in 2014, and she hired Fordham students and graduates to help with administrative duties related to her theater operations. In 2007, the Fordham Law Alumni Association bestowed its Medal of Achievement on Hill. And just two days before her death, the School awarded her, at its annual Golden Rams luncheon, the Milton Fisher ’42 Second Harvest Award in recognition of her exceptional contributions to society.

At the event, Dean Matthew Diller praised Hill for her abiding generosity and selflessness. “She’s genuinely interested in what other people bring to the table,” Diller said. “She’s effervescent, friendly, positive, and wants to nurture real human interactions. If success in the theater is built on authentic human interactions, then Peggy should give workshops in how to succeed in show business.”