Return to Fordham Law School
You are at:Home»Alumni»Celebrating Fordham Law Women in the Judiciary

In a 2007 Fordham Law Review article, “A Tribute to the Fordham Judiciary,” Professor Constantine Katsoris ’57 rightly praises the legacy of judges that Fordham Law has produced. The appendix to Katsoris’s article proves his point: it lists over 650 Fordham-educated judges. But the list also reveals an inequality; for every 20 or so male judges listed, there are only around two female judges.

“This longstanding imbalance is lamentable, but our Fordham Law women graduates have not let small numbers stand in their way,” said Dean Matthew Diller in his opening remarks at an October 11 event celebrating Fordham Law women in the judiciary.

Diller also reminded the crowd in the Gorman Moot Courtroom that, since Katsoris’s article was published, Fordham Law women have been increasingly present in the judiciary. “If I have any misgiving about tonight’s program, it’s that we couldn’t accommodate a panel discussion large enough to include all our incredible woman judges,” he said. 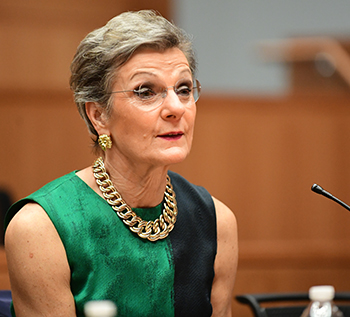 Seibel began the discussion by encouraging the panelists to tell their personal stories. “There are innumerable different paths to becoming a judge,” Seibel noted.

For Quiñones, the path to the judiciary was gradual, starting with her studying pre-med as an undergraduate at Brown University before pivoting to law, and in 2010, being appointed to the New York City Criminal Court in Bronx County.

For Silbermann, a former justice in the civil branch of the New York Supreme Court, New York County, the decision to sit on the bench came early. “I wanted to be a judge from the very first day I entered law school,” she said. 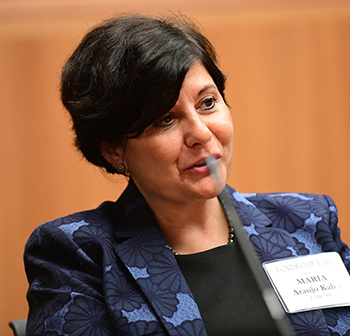 From there the discussion shifted to advice for young women pursuing a career in the judiciary. “Look for multiple mentors,” said Eagan, who serves on the United States District Court for the Northern District of Oklahoma and the United States Foreign Intelligence Surveillance Court. Eagan stressed that she would not have taken the path she did without the encouragement and wisdom of several mentors, both male and female. Added Seibel, “the more people you know, the more people who like you, the better your opportunities will be.”

In the United States, where over 50 percent of current law students are women, the courtroom bench remains a tough place for a woman to land a job. Only 33 percent of federal trial-court judges and 30 percent of state trial-court judges are women, according to a 2017 article in The Atlantic. A 2017 study by the New York State Bar Association found that just 25 percent of attorneys making courtroom appearances in commercial and criminal cases across the state were female. The panelists addressed these articles, and, although they proposed different strategies to alleviate the problem, they agreed that tangible steps are required to get the ball rolling. 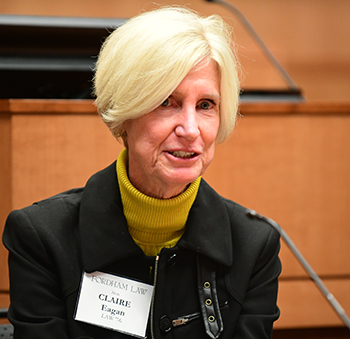 Judge Kahn, who serves on the Connecticut Supreme Court, said that concrete solutions are the only way to change a sexism that is deeply, and often subtly, ingrained in law offices. A rule that male and female associates must take turns ordering lunch, for example, would combat the discouraging practice of having the female associates be the ones to perform “housekeeping” tasks around the office. “If the awareness and the attitude change, people will feel like they fit in, and they will stay,” said Kahn, who benefited from the Noreen E. McNamara ’51 Memorial Endowed Scholarship while a student at Fordham.

The panelists then discussed the issue of work-life balance. “Get the best help you can get,” said Preska, a senior judge on the United States District Court for the Southern District of New York. The panel agreed that there is no perfect answer to the question—but the importance of frequent, honest self-assessment and seeking the help of others were two main takeaways.

The discussion was followed by a brief Q&A and a networking reception. The event is part of the School’s yearlong 100 Years of Women celebration.