Return to Fordham Law School
You are at:Home»Fordham Lawyer»Features»100 Years of Women at Fordham Law

On September 12, 1918, the Fordham Law faculty voted to admit women to the Law School. Ten days later, the Law School’s customary start-of-term ad in The New York Times announced “courses open to women.” In the week before classes convened, eight women signed up to study alongside 312 men. During the 2018–2019 school year, we celebrate the 100th anniversary of women at Fordham Law, recognizing our amazing women alumni, faculty, and students.

Let’s get this party started!

Fordham Law kicked off 100 Years of Women in style at the New York Historical Society. More than 400 alumni and friends gathered precisely 100 years to the day after the fateful faculty vote in 1918.

In a 2007 Fordham Law Review article, “A Tribute to the Fordham Judiciary,” Professor Constantine Katsoris ’57 rightly praises the legacy of judges that Fordham Law has produced. The appendix to Katsoris’ article proves his point: it lists over 650 Fordham-educated judges. But the list also reveals an inequality; for every 10 or so male judges listed, there is only about one female judge. “This long-standing imbalance is lamentable, but our Fordham Law women graduates have not let small numbers stand in their way,” said Dean Matthew Diller in his remarks at an October 11 event celebrating Fordham Law women in the judiciary. Over 60 guests attended the panel discussion and networking reception. Fordham Law School currently has 42 female judges sitting on various courts in 12 states.

The Fordham Law Review sponsored a two-day conference in November that examined
gender equality and the First Amendment.

Careers in corporate compliance are as in demand as ever, and women are stepping into leadership roles in the field. However, while recent figures suggest that women make up a majority of compliance officers, they are woefully underrepresented as wealth fund managers. Three Fordham Law alumnae discussed this imbalance among other investment management topics at an October 17 event sponsored by Fordham Compliance Programs. After outlining the trajectories to their current positions, panelists Courtney E.K. Lewis ’10 from Hound Partners, Gina N. Scianni ’04 from Contrarian Capital Management, and Maysa Vahidi ’00 from Rockwood Capital responded to questions posed by the audience.

Alumna Margaret M. “Peggy” Hill ’64 was the Law School’s own Broadway star. Involved in theater production for 30 years, she first began producing in the Hamptons, then off Broadway, and finally on the Great White Way.

On September 25, the School awarded her, at its annual Golden Rams luncheon, the Milton Fisher ’42 Second Harvest Award in recognition of her exceptional contributions to society. Sadly, two days after the luncheon, Peggy passed away.

Her contributions to the theater world, and to Fordham Law, will not be forgotten.

At the Golden Rams Luncheon, Dean Matthew Diller praised Hill for her abiding generosity and selflessness. “She’s genuinely interested in what other people bring to the table,” Diller said. “She’s effervescent, friendly, positive, and wants to nurture real human interactions. If success in the theater is built on authentic human interactions, then Peggy should give workshops in how to succeed in show business.”

This winter, during Black History Month, the Law School will induct two history-making graduates into the Alumni of Distinction. 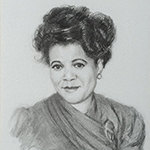 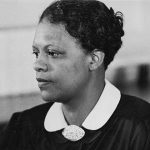