Return to Fordham Law School
You are at:Home»Alumni»Calling the Shots

Long before Justice Maria Araujo Kahn ’89 received an appointment to the Connecticut Supreme Court, she scheduled a meeting with Fordham Law Financial Aid Director Jim McGough ’61 to discuss how she would afford law school. Kahn’s path to his door was anything but common; as a child, she fled to America with her parents to escape civil war in her native Angola, worked in a hospital’s microbiology lab to pay for her undergraduate degree, and lived in a Salvation Army residence hall for women in Manhattan. Neither she nor her parents had the means to pay for law school, she reckoned.

As she waited to meet McGough, a bulletin board announcement for the brand-new Noreen E. McNamara ’51 Memorial Endowed Scholarship grabbed Kahn’s attention. The fine print noted Connecticut residents would receive preference—a fact she inquired about with the esteemed financial aid director. Kahn, who spent part of her childhood in Connecticut and attended college there for two years, learned later that summer she was the scholarship’s inaugural recipient. The scholarship, established through a grant from the Charles E. Culpeper Foundation, paid full tuition her first two years and for a substantial portion of her third.

“My interest in the law started early because I saw the impact it had on the lives of many people.”
– Hon. Maria Araujo Kahn ’89

Three decades later, in October 2017, Connecticut Governor Dannel P. Malloy appointed Kahn an associate justice on the Connecticut Supreme Court. She previously served on the state’s appellate court for one term in 2017, as a superior court judge for more than 11 years, and as an assistant U.S. attorney in New Haven. For each step of her career, Kahn felt she “owed a debt of gratitude” to McNamara, who raised six children with her husband Frank and developed a reputation as one of Connecticut’s most sought-after tax attorneys before her tragic death in 1984. 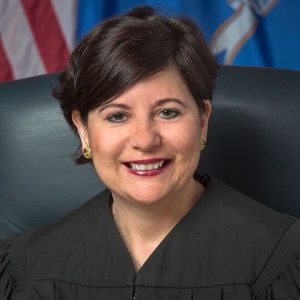 “Having the Noreen E. McNamara Scholarship allowed me the privilege of receiving a great legal education at Fordham Law School,” said Kahn, who clerked after graduation with the Hon. Peter Dorsey on the U.S. District Court for the District of Connecticut. “When I think of 100 Years of Women at Fordham Law, I think not only about those women who opened doors and paved the way as lawyers and judges but also about those whose financial contributions helped students like me attend law school.”

Kahn’s family departed their home in Angola, a former Portuguese colony in the southwestern portion of the African continent, for America in 1975. When she arrived in the United States, Kahn, then age 10, had to learn English quickly, both to excel in her classes and to serve as interpreter for her Portuguese parents. Her mother predicted she would make a good lawyer due to her propensity for argument. “My interest in the law started early because I saw the impact it had on the lives of many people,” Kahn said.

Years later while at Fordham, Kahn’s attention shifted to the judiciary for the first time when her Civil Procedure professor, Daniel Capra, and her Constitutional Law professor, Andrew B. Sims, encouraged her to apply for clerkships. Kahn initially thought that only students who earned a place on the Fordham Law Review could apply. As a 1L, she finished in the top 10 percent of her class, a requirement to keep the McNamara Scholarship, and made the Moot Court board.

Kahn’s clerkship with the late Judge Dorsey on the District Court of Connecticut planted the dream, however unlikely it seemed at the time, that she could one day ascend to the bench. Judge Dorsey possessed all the necessary requirements for a great judge—a good temperament, an open mind, and a willingness to listen—plus a strong desire for his decisions to achieve justice, his protégé said.

Kahn had worked as an assistant U.S. attorney for nearly nine years—investigating and prosecuting complex white collar investigations in both civil and criminal matters—when she applied to become a judge in 2004. Then-Governor Jodi Rell appointed Kahn in 2006 to the superior court, where she handled mostly criminal cases for 11 years. As a trial court judge, she made quick decisions, with limited time and information, that she hoped were correct. Conversely, appellate courts have the benefit of time to study the issues before them as well as a larger reading workload, particularly at the Supreme Court level.

“When you become a judge, you’re no longer playing the game nor are you rooting for one side or the other,” Kahn explained. “You’re the referee calling the shots at trial. When you’re on the appellate court, you’re the referee but you’re one step removed; you’re the referee who reviews the footage and decides if the judge on the field made the right call.”

While Kahn’s judicial responsibilities have shifted, her pursuit of justice, both as a judge and a teacher, has remained steadfast. Since 2008, she has co-chaired the state’s Limited English Proficiency Commission, creating and implementing a plan that has enhanced interpreter and translation services in court and online during a decade in which requests for interpreters among Connecticut residents doubled.

Kahn also co-chairs the Judicial Branch’s Access to Justice Commission and trains judges, judicial branch staff, law schools, and bar associations in Connecticut and other states on implicit bias and cultural competency. Access to justice is a critical area that state and federal courts need to continue to improve upon, she said. This May, Kahn spoke at a one-day conference at UConn School of Law on “Modest Means Representation and Unbundled Legal Services”—an access to justice initiative she has championed along with the Connecticut Bar Association and Connecticut Bar Foundation.

Kahn has also championed women’s empowerment in the law. She has set aside $75,000 in her will toward a scholarship at Fordham Law in memory of McNamara, and she hopes to increase the amount to make it an endowed scholarship. She encouraged today’s generation of women at Fordham Law to do their best in whatever field they choose, avoid being too hard on themselves, and seek out women mentors.

“There may be times in your career you feel you’re not moving ahead, but don’t worry about those times,” she advised. “There have been times when I’ve applied for jobs that I did not get, and I was discouraged about what that meant for my career long term. At the end of the day, those disappointments led to better options.”