Return to Fordham Law School
You are at:Home»Alumni»Standing with Refugees
“The major motivation is seeing that there are large numbers of displaced people—refugees who are in need of assistance—as well as host communities who are trying in earnest to receive and provide for them.”
– Zaid Hydari ’09

Wars, violence, and persecution uprooted a record 68.5 million people across the world in 2017, according to the UN Refugee Agency’s annual Global Trends study. This ongoing global crisis has thrown into sharp relief the immense need to support and expand refugee rights—a need that Zaid Hydari ’09 has worked tirelessly to address with his Refugee Solidarity Network (RSN).

RSN protects the rights of people uprooted from their homes and strengthens the communities where they seek safety. In partnership with advocates and local stakeholders, the organization focuses on capacity development in refugee host countries outside the United States and advancing legal frameworks that uphold human rights. Since its launch in 2014, RSN has widened its reach from its first focus country, Turkey, to neighboring Greece and Bulgaria, and most recently to Bangladesh, while maintaining a commitment to responses rooted in local communities.

“The major motivation is seeing that there are large numbers of displaced people—refugees who are in need of assistance—as well as host communities who are trying in earnest to receive and provide for them,” said Hydari, the nonprofit’s executive director and co-founder. “My interactions with civil society—lawyers, NGO workers, and others in developing host countries that are very often depicted as lacking the know-how or desire to offer proper reception for refugees—have shown that they are very capable, interested, and already working to make conditions better. Knowing they are invested in the work and open to collaboration has been inspiring and motivating.” 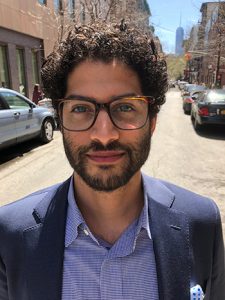 Hydari grew up in Houston, Texas, the beneficiary of what he describes as a stable and fortunate upbringing. However, family stories about their migration, beginning with the 1947 Partition of India, sparked an early interest in human mobility. So did his adolescent experiences with his mother as an informal volunteer helping refugees from Afghanistan, Iraq, and Kosovo resettle in Houston. These interactions, with family and strangers from thousands of miles away, forced him to recognize his privilege and created a feeling of responsibility within him to engage with others whose lives were anything but stable.

Hydari’s time at Fordham Law School, both in the Community Economic Development Clinic and with the Leitner Center for International Human Rights, laid a valuable legal and practical foundation for the work he does today. His clinical work with community-based organizations showed him how organizing around a cause could and should be performed when one sees a gap in services. The Leitner Center, meanwhile, helped him understand how his U.S. legal training and education—and thus skills such as leveraging critical analysis, client interaction, and case management—could be utilized internationally.

Hydari’s connection to the Leitner Center also enabled him to spend his first year in Turkey. In 2010, Hydari received the James E. Tolan Human Rights Fellowship, providing him the financial backing to design his own project dedicated to human rights. He decided to work on refugee rights in Turkey at a time when the numbers of refugees and asylum seekers were growing, but had not grown exponentially as they would in the coming years with the flare-up of the Syrian humanitarian crisis.

While the efforts of the nongovernmental organization Hydari worked with were critical among the refugee and migration landscape not only in Turkey but in relation to Europe as a whole, resources were lacking. Hydari and colleagues developed the idea to mobilize additional support, including more legal fellows and other organizational models such as pro bono partnerships, from the United States. From this idea sprang the Refugee Solidarity Network, for which Hydari led the startup process. In August 2014, he became the network’s executive director.

From the network’s early days, it has focused on helping ensure that the newly available legal framework for refugees and asylum seekers in Turkey works as intended. To that end, RSN has teamed with lawyers and legal service providers to build programs that deliver services to refugees on the ground. Hydari’s organization has since evolved to share its expertise in other refugee host settings, such as in Bulgaria and the Rohingya refugee crisis in Bangladesh.

The need for the work on the ground is obvious. Keeping interest and focus of supporters back home, in America in 2019, continues to be a challenge; however, Hydari remains hopeful.

“It can be difficult right now to garner interest and attention in things happening halfway around the world, especially at a time when there are so many domestic social justice causes that need attention,” Hydari said. “But there are more and more talented individuals in the U.S. looking for opportunities to work on human rights issues, who, if properly engaged, can come up with creative ways to address this issue.”

To this end, Hydari highlighted the “tremendous opportunity” before Fordham’s student body, alumni, and faculty to remain involved on refugees. The Law School’s location in New York, a hub for people from around the world, and its plethora of centers dedicated to public interest legal work, domestically and internationally, means it can and should be a leader in this human rights area, Hydari said.