More than 650 alumni and friends gathered at Cipriani 42nd Street on March 1 for the Annual Luncheon to celebrate the achievements of Kim Koopersmith ’84, who received the Medal of Achievement, the highest honor bestowed by the Fordham Law Alumni Association. The School also launched a fundraising campaign, Forward: The Campaign for the Fordham Law Experience.

Koopersmith is the chairperson of Akin Gump Strauss Hauer & Feld LLP, an elite global law firm that has consistently earned praise for its client service and commitment to diversity. Koopersmith’s leadership is key to the firm’s worldwide success, and she herself has been recognized for her innovative and transformative approach to law firm management. Last year she received the Flex Leader Award from the Diversity & Flexibility Alliance in recognition of her efforts to move the firm toward a more inclusive workplace through holistic flexibility. In 2014, she was named an Agent of Change by Women of Influence magazine in 2014 for her efforts to promote a diverse work environment and flexible work schedules. 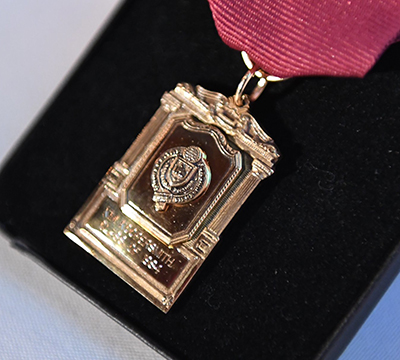 The 2019 Medal of Achievement, presented to Koopersmith

Before presenting the award to Koopersmith, prominent civil rights activist and lawyer Vernon Jordan spoke about the industry impact of Koopersmith’s firmwide initiatives.

“She has used her position to continue advocating for women, for attorneys of color, for flexibility and fairness, and for the future of not just Akin Gump but the legal profession in its entirety,” Jordan said.

In her acceptance remarks, Koopersmith repeatedly noted with pride the School’s ongoing centennial celebration of Fordham Law women and recognized the female professors who made a difference in her time as a Fordham Law student.

“My path to being a lawyer began with a strong legal education and I can’t help again, in celebrating 100 Years of Women, to note the role of women in my education,” Koopersmith said. “I should have appreciated how amazing it was in 1981 that two of my four first-year professors were women.”

Those two professors were Helen Bender and Gail Hollister, whom Koopersmith called out by name, as well as Professor Maria Marcus, who coached Koopersmith during her time on the moot court team.

Also bestowed at the luncheon were the Rising Star Awards, which recognize the achievements of alumni in three distinct fields who have graduated within the past 15 years. Grissel Seijo ’06 was recognized in the in-house and business field, Alessandra Biaggi ’12 in government, public interest, and nonprofit field, and Elisa D’Amico ’06 in private practice.

After the awards were distributed, Dean Matthew Diller directed the crowd’s attention to a large screen for a video that launched Forward: The Campaign for the Fordham Law Experience.

“Our mission is more important now than ever before,” Diller said. “What we bring to the world in terms of educating and preparing lawyers who are committed to excellence, integrity, and service is critically important.”