Return to Fordham Law School
You are at:Home»Law School News»Prevention Before Incarceration: Focusing on Violent Offenders

“The United States is the world’s largest jailer,” said Dean Matthew Diller in his opening remarks at a Fordham Law School panel entitled, “Who, What, How & Why Now: Putting Violent Offenders at the Center of Mass Incarceration Reform.” CBS News correspondent Scott Pelley moderated a lively and engaging discussion between five expert panelists that covered topics including the purpose of American prisons, violent offenses stemming from mental illness, and how best to rehabilitate those convicted of violent offenses and reintegrate them into society.

Diller referred to mass incarceration as “one of the great social justice issues of our time,” remarking that although the United States makes up only 5 percent of the world’s population, the country holds over 20 percent of the world’s imprisoned population. Moreover, as over half of the U.S.’s imprisoned population is serving time for violent crimes, Diller emphasized the necessity of focusing on violent offenses when discussing prison reform.

Pelley directed his first question to Darcel D. Clark and Larry Krasner, District Attorneys for the Bronx and for Philadelphia, respectively. “What are the alternatives to prison when violence is the offense?” he asked. Krasner responded to Pelley by reminding the listeners that a wide variety of crimes can potentially constitute a violent offense—from possession of a weapon, to a mugging, to first-degree murder—and that one must first consider the severity and scale of the crime before discussing appropriate methods for accountability. 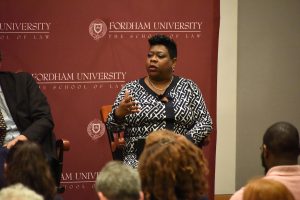 Clark emphasized the importance of considering each case individually and of looking beyond the charges to consider how this person first entered the criminal justice system. Karol V. Mason, president of John Jay College of Criminal Justice, and former assistant attorney general, mentioned that many perpetrators of violent crimes were once victims themselves. She cited the success of a program that worked with young men in urban areas who’d been victimized to aid them in healing from their traumas, and to help prevent them from seeking violent retribution.

“Ending mass incarceration is impossible if you’re going to take such a rigid view of what violence is,” said Jonathan Lippman, former chief judge of the State of New York and former chief judge of the New York Court of the Appeals, Counsel, Latham & Watkins. Lippman said he believes if someone is going to hurt another person, they may be a good candidate for incarceration, but if the offender is not liable to hurt 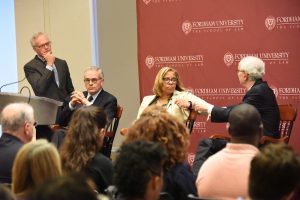 someone, they should be a candidate for diversion programs while remaining with their family and community.

Fordham Law Professor John Pfaff, the author of the 2017 book Locked In: The True Causes of Mass Incarceration and How to Achieve Real Reform, noted that the main factors contributing to offenders’ successful return to society are jobs, education, and connection to family and community. He cited Germany’s prison system as an example of a more successful model than the one used in America. The overarching difference between the two? “German prisons treat the people in them like people,” Pfaff summarized. Inmates learn trades and earn the national minimum wage for their work while incarcerated, ensuring they have both skills and funds necessary to rebuild their lives when released. “You can have a prison system,” he explained, “Just not ours.” 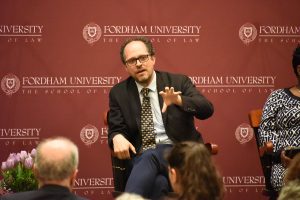 Pfaff also reiterated the point Diller made in his opening remarks: roughly 55 percent of the United States’ incarcerated population is in prison for violent offenses such as rape, murder, robbery, and aggravated assault. Even if we were to jail only those people convicted of murder, the U.S.’s incarceration rate would remain in the top 25 or 30 in the world. What he cited as our “core issue” is how harshly we punish for these offenses.

The real key to ending mass incarceration in the United States, the panelists agreed, is investment in programs that support mental health coverage and combat poverty and unemployment. “Imagine a world in which we decided the best way to deal with cancer from cigarettes was oncologists,” quipped Krasner, a reminder that prevention is a far more successful method for combating violent crime than incarceration.

The panelists also discussed the voices and rights of victims when considering criminal justice reform. Both Clark and Krasner agreed that many victims and their families don’t seek the maximum sentence for violent offenses, even in the case of homicide. In some cases where the people involved know one another, especially in the instance of domestic violence, families are facing the loss of not only the victim, but the defendant, as well. “As a prosecutor, you have to be able to work with these families to decide what justice is going to look like for everyone involved,” Clark said.

The panel was presented in conjunction with the A2J Initiative, the National Center for Access to Justice, Advocates for the Incarcerated, the Fordham Law Review, and the Fordham Urban Law Journal.

Who, What, How & Why Now: Putting Violent Offenders at the Center of Mass Incarceration Reform from Fordham Law School on Vimeo.