Return to Fordham Law School
You are at:Home»Law School News»Breaking the Glass Ceiling

On April 8, Wall Street Journal reporter Sara Randazzo moderated a panel discussion entitled “Breaking the Glass Ceiling” with Jessica Carey ’03, partner at Paul Weiss; Deneen Donnley ’92, executive vice president, general counsel, and secretary at USAA; Dianne McKeever ’15, co-founder and chief investment officer at Ides Capital; and Molly Ryan ’15, associate at Latham & Watkins. Dean Matthew Diller opened the discussion by citing a 1988 lecture given by the late Judge Judith Kaye, in which she said, “In this society, that in a far shorter time has made a giant leap for mankind by putting people on the moon, can we honestly say that sufficiently great steps have been taken for womankind? I think not.” Though Kaye made these remarks more than 30 years ago, women in traditionally male-dominated fields like law and finance still face a number of challenges. As Diller noted, 50.3% of current law school graduates are women, but women make up less than 35% of the lawyers at law firms. Roughly 20% of the partners at major law firms are women. “The numbers don’t tell the whole story,” he reminded us, but they certainly do paint a vivid picture of how much farther the legal field needs to go in terms of gender equality.

McKeever, an activist investor and founder of a hedge fund, noted gender disparities in the world of finance. She said that in wealth management, women are often being paid “significantly less than men,” and within the hedge fund and private equity industries, while many firms are hiring women in general counsel and investor relations director positions, the “real power lies” within the investment teams, which remain nearly entirely male.

The backlash to #MeToo came up as an emerging challenge. Randazzo said that some have criticized the movement, claiming it scared off too many men from becoming mentors to women. Donnley has heard similar discussions, but she hopes that these fears ultimately do not dissuade male executives from extending the same networking opportunities to men and women.

Conversely, being a woman in a male-dominated field has opened doors when organizations or leaders looked to diversify their teams. McKeever cited her tenures as the sole woman director on several public company boards as indispensable experiences in the development of her governance-first activist strategy. Carey said she had been given opportunities to interface with clients and hone her legal skills in part because clients insisted on diverse teams. 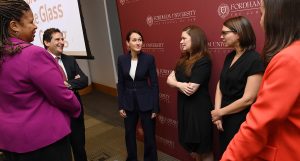 Ryan, the most recent entrant into the workforce, emphasized that conscious intervention in terms of diversity is important not only so that firms have people of different genders, races, and backgrounds collaborating on complex issues, but also to serve as a model of diversity. As a law student, she recalled researching different firms and noticing those at which there were few or no women in leadership roles. “Why would I go there?” She would ask herself. “And they were off the list.” More and more law students have similar thought processes, she has found, and firms that fail to promote and showcase diversity will “lose out on talent.”

Carey noted that change in the legal world has been slower than she hoped, but is clear and perceptible. She sees more and more female lawyers with successful careers and full lives outside of work. The panelists agreed that younger generations they’ve encountered personally and professionally are less and less likely to stand for the entrenched gender paradigms and will be even more active in advocating for equality along gender and racial lines.

Change has finally started to go beyond token inclusion, as well; McKeever mentioned that many boards now receive criticism for including just one woman. “While any addition of diversity to a board or c-suite is a positive development, a critical mass is even more impactful,” she said. Donnley agreed with her, citing the rule of threes: “When there are at least three women or three people of color, they feel much more empowered to actively participate.” In her own experience on the executive council of USAA, she is one of three women and she emphasized, “We are very purposeful in supporting each other.”