On the same day of his graduation from Fordham Law on May 20th, Casey Adams ’19 was honored with a Law360 Burton Award for Distinguished Legal Writing.

Each year, the Burton Awards, in partnership with the Library of Congress, choose ten winners among the “finest law school writers.” Adams has been selected for his paper entitled, “Home Rules: The Case for Local Administrative Procedure,” which analyzes and advocates for the importance of procedural statutes for cities in the United States.

“In my first year at Fordham, I took Legislation and Regulation with Professor Saiger,” said Adams. “The class taught me the basic concepts of administrative law that inspired me to dig more deeply into the topic when it came time to write my student Note for the Fordham Law Review.”

He had originally written the paper as a shorter piece on New York City administrative procedure for the Law of the City of New York course he took with Professor Matt Gewolb. In the award-winning version of the piece, he used New York, Seattle, and Philadelphia as his three case studies. 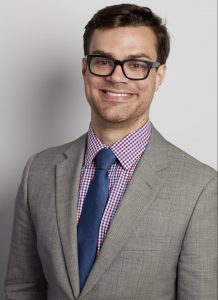 “Professor Nestor Davidson was my advisor for the Note-writing process, which was a great opportunity for mebecause he had already published an in-depth article on my subject entitled ‘Localist Administrative Law’ in the Yale Law Journal,” Adams explained.

An associate editor of the Fordham Law Review, Adams said he has “greatly enjoyed” his time at Fordham.

Originally from Connecticut, Adams completed his bachelor’s degree in History and Political Science at McGill University in Montreal, Canada. The student, who has recently turned 30, has also had a decade-long career in politics.

He worked for both of Barack Obama’s presidential campaigns—in 2008, as a field organizer in Clay County, Florida, and in 2012 as the regional field director in Nevada. In 2013, he worked as the campaign manager for NYC council member Stephen Levin, who later appointed him to be his deputy chief of staff.

For the last few years, he’s been working at the New York City Department of Consumer and Worker Protection, where he is the director of city legislative affairs. His commitment to public service sparked his interest in pursuing a law degree.

“I wanted to get a better understanding of the junction point between the politics work I had been doing and the actual consequences of the legislation,” he said.

Adams chose to attend the evening program so that he could continue to pursue his career in politics: “The school does a great job at helping evening students feel that they are an integral part of the community,” he said. “Over my four years at Fordham, I had a lot of support from many professors, who knew that I had a unique schedule.”

At the NYC Department of Consumer and Worker Protection, he handles the legislative portfolio, while working in licensing, worker protection, and consumer protection.

“It’s a unique position—I study the law at night, and I participate in the actual process of lawmaking during the day,” he commented. While pursuing his degree and working a full-time job, Adams also found the time to continue learning Spanish and work on his cooking skills.

“I’ve always had an interest in public service, and I hope to continue on this track,” he concluded.