On May 8, Congregation Beit Simchat Torah (CBST) launched its new weekly pro se immigration clinic, which aims to help immigrants who are representing themselves complete applications for asylum and to determine what other legal services might be available to them.

The clinic is part of a partnership with the New Sanctuary Coalition (NSC) and Seeking Asylum and Finding Empowerment (SAFE) and receives funding through a grant from UJA-Federation of New York. Lee Jason Goldberg ’08, a board member of CBST and an organizer of the clinic, stressed the focus on LGBTQ immigrants, but the Wednesday evening sessions are open to all seeking assistance with asylum procedures. 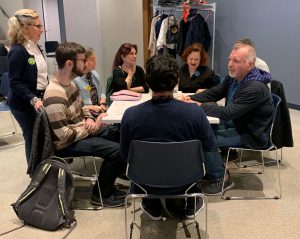 Each week a staff of volunteers helps those in need by posing a series of intake questions designed to assess the asylum case. Some volunteers are lawyers, others are interpreters and refugees’ advocates, and still others are CBST members eager to help make a difference.

In anticipation of the clinic, the synagogue hosted an accredited continued legal education (CLE) class on April 15 entitled “Introduction to Asylum Law,” designed for attorneys interested in volunteering. CBST is the first synagogue in Manhattan, and perhaps anywhere, to offer its own accredited CLE class, which had roughly 40 attendees. CBST will be offering more classes in the future. At a hands-on training session on April 24, over 50 prospective volunteers were in attendance.

The congregation also partners with RUSA LGBT, a group initially formed to unify and support Russian-speaking Jews in the LGBTQ community, but as Russia and other countries of the former USSR (or other formerly-Soviet countries) began increasing violent attacks on their LGBTQ citizens, many Russian-speaking—but not necessarily Jewish—immigrants began seeking support, and their scope expanded.

CBST was founded in 1973 and since its inception, has focused on inclusion, diversity, and acceptance, especially within the LGBTQ community. It is only natural that an institution with such values would open its doors and offer its resources to aid those seeking asylum in the United States. In January of 2017, the congregation’s board voted to become a Level 2 sanctuary congregation, allowing them to aid in sanctuary-related activities, including accompanying people at their immigration hearings for support.

Rabbi Marisa James noted that nearly all Jews in America are descended from immigrants and refugees, and now more than ever it serves to be cognizant of that. “It really feels like each successive generation of immigrants is figuring out how to welcome and support the next one, and that’s wonderful,” she said.

To learn more about the clinic and to volunteer, please visit CBST’s website.