Fordham Law’s Professor Kimani Paul-Emile accepted the prestigious John Hope Franklin Prize at the annual meeting of the Law and Society Association on May 30 in Washington, D.C. She received the award for her article “Blackness as Disability?” published last year in the Georgetown Law Journal.

The John Hope Franklin Prize is awarded each year to recognize “exceptional scholarship in the field of Race, Racism and the Law.” It is named after John Hope Franklin, a professor of history and law known for his work on racial inequality in the United States.

Professor Paul-Emile, who specializes in the areas of law and biomedical ethics, anti-discrimination law, race and the law, and health law, said she was “honored and humbled” to receive the award and to have her work recognized by the Law and Society Association.

“This prize is incredibly meaningful to me,” she said, explaining that it inspires her to continue producing scholarship that can stimulate dialogue on issues related to race, equity, and inclusion. “Talking about race can be very difficult and uncomfortable for some people. My hope is that this article, despite — or, perhaps, because of — its provocative title, can encourage people to continue this dialogue and a reexamination of the way we understand and approach addressing racial inequality in the U.S.”

Professor Paul-Emile noted that recent, high-profile incidents of discrimination against African-Americans prompted her to begin thinking about how the stigma associated with blackness in the United States can work to disable black people.

As she explains,“blackness is not by itself an impairment, however, black as a racial classification was designed to be disabling. Racial categories were created explicitly to serve as a caste system to privilege some and disadvantage others. Within this system, racial minority status was established to limit opportunity, participation, and achievement, and it continues to do so in many areas of social and economic life.”

In her article, Professor Paul-Emile writes that “being black increases the odds of living in poverty, attending failing schools, experiencing housing discrimination, being denied a job interview, being stopped by the police, receiving inferior medical care, living in substandard conditions and polluted environments, being unemployed, receiving longer prison sentences, and, ultimately, having a lower life expectancy.” The article notes that, “these increased risks are not fully explained by income: the stigma associated with being labeled black in the U.S. has an independent disabling effect distinct from the effects of socioeconomic status.” 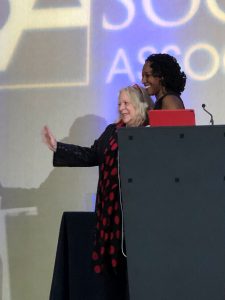 Traditional race-based anti-discrimination laws, she explains, require plaintiffs to prove that defendants acted with malicious intent, and promote the impractical norm of colorblindness, which means that government cannot take account of race even to make up for past, state-sanctioned, race discrimination. The law, therefore, fails

to address common forms of racial discrimination, including structural inequality and implicit bias.

Professor Paul-Emile maintains that disability law with its “social model of disability” may be a more useful frame for thinking about racial inequality. She observes that disability law encompasses two conceptions of disability: the medical model, which sees disability as primarily medical; and the social model, which understands disability as arising from social hostility or indifference to those with different attributes rather than from an “impairment” itself. She argues that because disability law does not require a showing of intent, is disability conscious, and “more constructively speaks in the language of reasonable modification and balancing remedial justice against social and economic cost, it holds more promise for conceptualizing how to address race discrimination and structural inequality.”

Professor Paul-Emile praised Fordham Law School’s community for its intellectual openness and rigor, its commitment to asking the hard questions and taking on some of the pressing issues of our time; all of which, she said, “provides fertile ground for important scholarship.”