Return to Fordham Law School
You are at:Home»Law School News»Law and the #MeToo Movement

On April 5—just over six months after Dr. Christine Blasey Ford testified against Justice Brett Kavanaugh in front of the Senate Judiciary Committee—a group of lawyers, professors, writers, and activists spoke at Fordham Law School about their professional experience dealing with concerns of sexual harassment and assault. The conference, entitled Law and the #MeToo Movement, included topics of intersectionality, access to justice, the effects of digital culture and social media, and of course, the movement’s future. Stein Scholars Vanessa Vecchiarello ’20, Rachel Smith ’20, Gabriella Romanos Abi Habib ’20, Julia Bonnell ’21, Eartha Jn Baptiste ’20, Saniya Suri ’21, and Zulkifl Zargar ’21 organized the event, which was spurred by the frustration of the students who watched the Kavanaugh hearings and wanted to see a more nuanced discussion of issues relating to allegations of sexual misconduct. 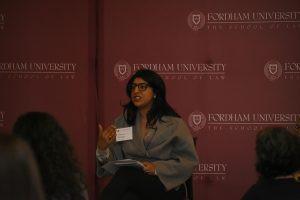 In the first panel, “Intersectionality & the #MeToo Movement,” Kalpana Kotagal, partner at Cohen Milstein, opened the discussion with the observation that in a movement intended to center survivors, “some survivors are more centered than others,” referring specifically to cisgender white women, whose voices were initially thought to be too often at the forefront of the discussion. Meredith Talusan, executive editor of them, noted how important intersectionality is, especially as the movement broadly promotes a cut-and-dry narrative in which men are the abusers and women the victims, effectively erasing the harassment of transgender women by cisgender women, even within the #MeToo movement.

The other panelists included Suzanne Goldberg, professor at Columbia Law School and Christelle Onwu, lead advisor for African communities at the New York City Commission on Human Rights. Onwu emphasized the importance of policy in shaping the continued future of the movement, noting that one must be able to change laws in order to effect real change.

Much of the discussion in the second panel, “Access to Justice & The #MeToo Movement,” focused on Education Secretary Betsy DeVos’s proposed changes to Title IX. Michelle J. Anderson, the president of Brooklyn College, argued that the changes would have drastic implications in how schools deal with allegations of sexual misconduct, especially in an institution’s responsibility to investigate allegations of off-campus sexual assault. Overall, she said, these changes make it more onerous—and potentially, more uncomfortable—for survivors to report their harassment and assault. Rachel Ferrari ’02, chief of Child Abuse/Sex Crimes Bureau at the Bronx District Attorney’s Office, noted that there is a disconnect between the hashtag and the actual process of reporting sexual misconduct; social media is a more or less safe space to share survival stories when compared to the real world. She recalled working with a 15-year-old girl who was afraid to report her assault because she didn’t want to go through what she’d just witnessed Dr. Blasey Ford endure in the national media.

Anderson also noted that many damaging interactions at work and in educational settings, such as the denigration of women’s experiences and contributions, are not considered sexual harassment nor are they punishable by law.

The other speakers, Paul Bland, executive director of Public Justice; Bennett Capers, professor at Brooklyn Law School; and Elizabeth Tang, legal fellow at the National Women’s Law Center, also discussed the issues involved in reporting sexual misconduct, including the gap between reporting and prosecuting cases, as well as how reporting will often limit a survivor’s access to education. Tang mentioned that too many schools will simply suggest that a survivor enroll in alternative educational courses—like evening or online classes—to avoid the trauma of sharing a classroom with their attacker. These less rigorous courses often have an additional negative impact on the student’s academic performance.

The #MeToo movement has been a digital one since actress Alyssa Milano took to Twitter to urge survivors to share their experiences online. The #MeToo hashtag revitalized the 2006 movement started by Tarana Burke to support survivors of sexual violence, especially among black women and girls. Irin Carmon, senior correspondent at New York Magazine, contributor at CNN, and co-author of Notorious RBG: The Life and Times of Ruth Bader Ginsburg; Sunu Chandy, legal director of the National Women’s Law Center; Sophie Ellman-Golan, communications director of the Women’s March; and Carrie Goldberg, founding partner of C.A. Goldberg, PLLC, discussed the strengths and drawbacks of digital culture in a panel entitled “The #MeToo Movement in the Digital Age.”

While social media can provide a sense of community and security for survivors, the abundance of free personal information online can easily become a weapon of sexual harassment in the hands of someone with an axe to grind. Goldberg, whose law firm advocates for victims of harassment, sexual assault, and blackmail, mentioned one of her clients, whose ex-boyfriend had created a fake Grindr profile using her client’s photographs and personal information, including his home address. As a result, over 1,000 strangers invaded his life and his personal space, but Grindr was under no obligations to remove the fake profile, as per Section 230 of the Communications Decency Act.

Carmon, who broke the story on the sexual assault allegations against Charlie Rose in a 2017 article in the Washington Post, had been investigating the rumors surrounding the journalist and talk show host since 2010, but found no one willing to confirm them. However, after the accusations against Harvey Weinstein broke, she found that many people she had previously contacted were finally ready to share their experiences, some on the record. The #MeTo movement had not only inspired the confidence to speak, but the assurance that their shared testimony would have weight. Rose was fired from PBS almost immediately, and from CBS shortly after. 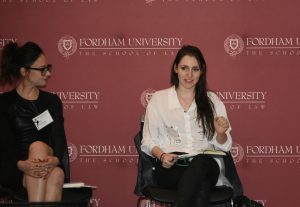 Ellman-Golan mentioned one shortcoming she has noticed in the movement; the pervasive narrative tends to flatten people into monsters or saints, especially in the case of recent complaints about the behavior of former Vice President Joe Biden. “What happens when someone without bad intentions still causes harm?” she asked, noting that we still lack more nuanced mechanisms than legal proceedings and job loss to hold someone accountable for bad behavior.

Chandy shared a victory in a case where NWLC filed an amicus brief in the context of fighting back against cyber harassment and holding entities accountable. A Fourth Circuit panel set precedent in December 2018 by reviving a lawsuit against the University of Mary Washington for failing to address anonymous online harassment of female students. The Court held that the female students stated a claim under Title IX because the school had “substantial control” over both the harassers and the context in which the harassment occurred, and that the First Amendment did not absolve the school of its responsibility to respond to victims.

In the final panel, “The Future of the #MeToo Movement: What Are the Next Steps?” panelists Alex Baptiste, policy counsel for the National Partnership for Women & Families; Julie Fink, managing partner at Kaplan Hecker & Fink LLP; Nadia Hewka, supervising attorney of the employment unit at Community Legal Services; and Emily Martin, vice president for Education & Workplace Justice at the National Women’s Law Center, spoke about how such a multifaceted movement could build momentum and lead to not only personal change, but institutional change.

Fink is hopeful for the future, as she is encountering a new generation of lawyers eager to instigate and continue conversations about how to promote inclusivity. She and Baptiste agreed that the movement has such momentum because it attempts to give voice to so many different groups. “Practice being an ally,” Baptiste suggested, echoing Fink’s sentiments. She cautioned that sexual harassment is about power more than anything else, and it often goes unchecked when the abuser exploits hierarchical power structures, both within the workplace and without. “The more that you can be an ally to those who are most likely to be disproportionately harmed by that power structure, the more chance we have of continuing the work we are doing,” she said.

One of the moderators asked how the speakers would recommend responding to those who claim that the movement has gone too far. Martin reminded listeners that despite the fear that the hashtag will inspire false accusations, instances of sexual misconduct are still widely underreported. “There continues to be a culture of silence that surrounds these issues,” she said, implying, perhaps, that #MeToo has not yet gone far enough.