Return to Fordham Law School
You are at:Home»Alumni»Incoming Class Hears the Case for Professionalism

David B. Anders ’94, president of the Fordham Law Alumni Association (FLAA) and partner at Wachtell, Lipton, Rosen & Katz, introduced and moderated the panel. His remarks first posed, then answered, the question of why professional standards of behavior are so important in legal practice. “Lawyers are the builders of our social structure,” said Anders.“We protect democracy. There would be no rule of law without lawyers.”

He then asked the five alumni panelists to describe how and why they became lawyers, their career progression, and what they hoped to accomplish in the future.

“The essence of legal professionalism is to be a problem solver.”—Maura Monaghan ’96

Maura Monaghan ’96, co-chair of Debevoise & Plimpton’s Commercial Litigation Group, gave the audience a frank and humorous look at her work in the music industry before deciding to pursue legal studies. Once at Fordham, she realized that law school filled an intellectual void she had encountered in logistical and administrative work. She joked that many people may not see commercial litigation as a vocation in the same way they might view public interest or pro bono work, but she spoke of the value in being a client’s ally in a dire situation. “My calling is to be the person who doesn’t turn away from a hard problem,” she explained. “And I believe the essence of legal professionalism is to be a problem solver.” 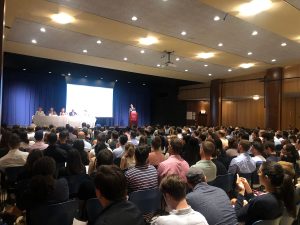 Jojo Annobil ’90, spoke about how his experience as an immigrant from Ghana has shaped his ability to empathize with and advocate for his clients. When he first graduated from Fordham, he found it difficult to find work due to his immigration status, and when he began working for the Legal Aid Society, he knew he wanted to help others in his position. Today, he serves as the executive director of the Immigrant Justice Corps, and quite frequently he will run into past clients on the street and the subway who are eager to thank him for his aid. “Every day I am able to change the trajectory of someone’s life,” he said.

Unlike some of the other speakers, Louise Firestone ’85 initially came to law school more out of necessity than passion. Hoping to be a diplomat, she obtained a master’s degree in International Relations, but graduated during a UN hiring freeze. She began working as a paralegal, but recognized she could easily do the jobs of the lawyers for whom she worked. Currently, as the senior vice president for legal affairs and general counsel at LVMH Moët Hennessy Louis Vuitton Inc., she feels it is her responsibility to work diligently to make sure the luxury brands she represents live up to diversity and inclusion standards.

“What makes you wake up in the morning feeling excited to go to work?”—Jojo Annobil ’90

Similarly, Assemblymember Jo Anne Simon ’90 uses her position in the N.Y. State Legislature to promote diversity, especially “improving the numbers of women that are in elected office. Her commitment to inclusion extends beyond the professional sphere. “[Another] one of the things I’m most committed to now is improving education and making sure that we make education accessible and equitable for our students,” she said. She focuses on equity for students with disabilities and in 2017 led the fight for legislation designed to make it easier for dyslexic students to receive the assistance they need to become successful readers. 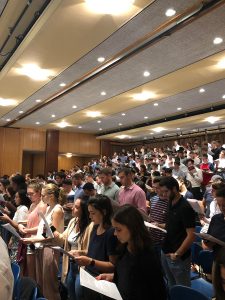 The panelists also offered some straightforward advice. “Clerking is one of the best things to do as a young lawyer,” attested Hon. Denny Chin ’78, a U.S. Circuit Judge for the Second Circuit and former District Judge for the Southern District of New York (where Anders had clerked for him). Before law school, Chin had been uncertain about his career ambitions, but during his 1L summer, he interned at a law firm and was able to work on a bank robbery trial, which inspired him to later clerk for Hon. Henry F. Werker after graduation.

Each speaker illustrated different ways in which a lawyer can carve out an impactful career, whether working in the public interest, corporate law, or as in-house counsel.

After the panel, the assembled 1Ls all rose and recited the Fordham Law School Professional Oath, setting the tone and intention for their legal studies and careers to come.

As I enter into the legal profession and begin my legal studies at Fordham Law School, I pledge to act with the utmost good faith and integrity.

I will study diligently, commit myself to honest performance on every assignment and examination, and uphold, at all times, Fordham Law School’s Code of Academic Conduct.

I will interact with colleagues and adversaries alike with honesty, professionalism, and civility.

I will seek opportunities to provide leadership and to serve my community and will behave in ways that reflect positively on me, Fordham Law School, and the legal profession.