Return to Fordham Law School
You are at:Home»Faculty»Global Order of the Court: Reestablishing the Power of the American Judiciary

Many legal scholars argue that the judicial branch of the American government should have little or no say in the executive branch’s conduct of foreign affairs. Professor Martin S. Flaherty disagrees. In his new book, Restoring the Global Judiciary: Why the Supreme Court Should Rule in U.S. Foreign Affairs, released September 3, 2019, he argues that not only should the judiciary play a larger role in foreign affairs, but that it must. 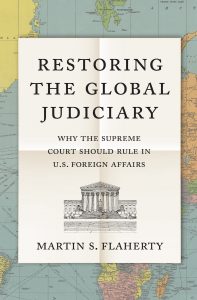 He breaks the book into four parts. The first covers the origins of the U.S. Constitution and the initial separation of governmental powers. One major reason for drafting the Constitution was that the United States was not upholding the terms of the Treaty of Paris, and Britain responded to the breach by similarly violating the Treaty. In the early days of the Supreme Court, treaties and other international law statutes were the law of the land—in fact, most of the Court’s major early decisions involved upholding terms of the Paris Treaty. The first Supreme Court justices were by necessity well-versed in international law. Many of them, including John Jay, were diplomats before ascending to the bench; John Marshall served as secretary of state and Supreme Court chief justice concurrently.

The second traces the United States’ waning commitment to judicial involvement in global affairs. As the country became more involved in foreign affairs and moved from global power to global superpower, the executive branch began to exert more pressure on the judiciary.

The third section of the book examines the Court’s current role through the lens of international relations theory, which suggests that foreign affairs no longer take place as one nation interacting with another nation, but rather as individual branches of governments interacting independently with the comparable branches of other governments.

Though Flaherty began writing before the last presidential election, President Trump’s expanded assertions of executive power have made his work particularly urgent. In his introduction, he emphasizes that in the particular instance of a “chief executive lacking the knowledge, experience, and temperament of even his most ‘imperial’ predecessors,” it is especially incumbent upon the judiciary to exercise a larger role in adjudicating global affairs.

“Today, the courts are at a crossroads,” he says. Though there have been some recent cases in which the judiciary has chosen to overrule an executive branch decision, the Supreme Court generally defers to executive orders in matters of national security. Flaherty cites Trump v. Hawaii as a decision that would have benefitted from more judicial pushback. The 2018 Court decision upheld Proclamation No. 9645, which greatly restricted the ability of people from seven countries with predominantly Muslim populations to enter the United States, regardless of their visa status. In her scathing dissent, Justice Sotomayor asserted that the ban worked under the “same dangerous logic” that passed Korematsu v. United States.

The final section of the book examines how the judiciary can move forward. “Ironically, my solution is backward-looking,” Flaherty says, emphasizing that readers should look to the Supreme Court of the Founders, or perhaps just as far back to 1952. In his introduction to Restoring the Global Judiciary, he examines Youngstown Sheet & Tube Co. v. Sawyer, a case in which the Supreme Court ruled that the federal government could not seize steel mills to keep them operating for the Korean War effort. Flaherty has taught the case in Constitutional Law courses, and he asks, “What better case than Youngstown to show the potential power of the American judiciary to maintain the rule of law, the Constitution, and with them, basic rights?”