Return to Fordham Law School
You are at:Home»Alumni»Holistic Support for the Fashion Industry’s Voiceless

Fashion—perhaps more than any other industry—places a premium on youth. Often, models begin their careers at 12 or 13, and many come to New York and Los Angeles from abroad, leaving behind their families and often their native language to be thrust headlong into a cutthroat industry that rarely has their best interests at heart. All too often, they are pressured to advance their careers by accepting jobs in questionable situations that leave them feeling uncomfortable, or worse. However, even as the #MeToo movement grew in the entertainment world, voices from the fashion industry had remained comparatively silent. 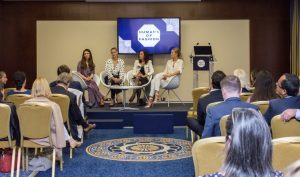 Romanova came to the United States at the age of 16 to work in fashion and has been modeling here for nearly eight years. She’s been lucky enough to never have experienced outright sexual assault, but throughout her career, she remembers numerous instances of inappropriate behavior and situations in which she felt distinctly uncomfortable. She kept quiet, lest she be fired and replaced for speaking out, or develop a reputation for being “difficult,” as she feared it would lead to fewer future jobs.

She kept her head down until she got a phone call from another model, who told her about her own experiences of sexual assault at the hands of her only client, which left her feeling like she had nowhere to turn. Romanova approached Costa, who was then studying at the Fashion Law Institute at Fordham, and whom she’d met years before at a Fashion Week event, with a simple idea: what if there was a support network for industry professionals? From there, the concept grew, and the two formed the Humans of Fashion Foundation.

The foundation works with Give an Hour and the Fashion Law Institute to provide pro-bono counseling and legal advice. Both services are available, confidentially, through the HOFF website. If a user requires counseling, they enter their zip code, the issues they wish to discuss, if they’d prefer a male, female, or other therapist, then the site matches the user with the available professionals who’ve volunteered their time to schedule an in-person appointment. For legal advice, the site directs users to the Fashion Law Institute, where Susan Scafidi, Jeff Trexler, and other staff members connect them with a volunteer lawyer who best serves their issues.

These functions are also available on the HOFF website. Costa said that since the app launched a year ago, many participants will use the app, but then follow up via email to ensure that their inquiries are confidential.

Unlike Time’s Up, HOFF does not fund cases, but offers a channel for advice and support. “What we are is a support network,” explained Costa. “We give an initial legal consult and legal education, and the connection to therapists, so it’s wellness with a holistic approach.”

Romanova chose the name “Humans of Fashion” for its inclusivity: the foundation is not to protect only models or only women in the industry, but also men, designers, assistants, makeup artists, stylists—anyone in the fashion industry in need of legal or mental health support. Having “humans” in the name also highlights one of the foundation’s core values: “It’s very people-to-people based,” Costa said.

Moreover, HOFF doesn’t direct its services only toward victims of sexual assault and harassment, but verbal and emotional abuse, as well. Last June, The Cut shed light on the prevalence of these issues, noting that the 2006 film, The Devil Wears Prada, feels a little too realistic for many with longtime careers in fashion. The popular Instagram account Fashion Assistants uses humorous memes that spotlight many of the ugly aspects of a seemingly glamorous field in which many assistants are underpaid, working around the clock for exacting, sometimes abusive bosses. Romanova and Costa have begun working with the creator of Fashion Assistants (who remains anonymous). Both groups will be featured in the first episodes of the BBC’s upcoming fashion podcast.

Costa recalled when she first met Romanova, almost ten years ago, she assumed she was much older than her 16 or 17 years because she exuded a certain mature sophistication. The phenomenon is not uncommon, and Costa refers to this enforced maturity as a “testament to the problems with the industry.” At a recent event, Costa overheard a model under 30 refer to herself as an industry “veteran”—and she wasn’t kidding—she’d been working in fashion since the age of 12. 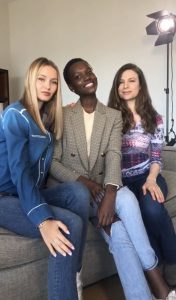 Romanova, model and face of Maybelline Herieth Paul, and Costa filming an episode of HOFF Academy

The same woman noted it’s worth asking for colleagues’ or agents’ advice to make sure a proposed opportunity sounds legitimate. “Don’t ever feel you have to respond within 20 minutes of receiving a message about a job or you’re going to lose an opportunity, or feel pressured to do something when your safety could be compromised.” It’s common sense advice, but Costa emphasized that hearing it from industry veterans may make those just starting out more apt to listen, especially now that some industry business is no longer conducted through agents and managers, but through Instagram direct messages and other social media platforms.

To offer more advice like this, enter HOFF Academy, where industry professionals share their experiences and advice via video interviews. So far, the series has featured models, actors, influencers, and company founders. On September 9, HOFF Academy conducted another video shoot to expand their offerings, making sure advice for those entering the fashion world—like how to protect oneself from uncomfortable work situations or how to combat insecurity while attempting to establish a career in a field infamous for discrimination (especially racism and body shaming)—is widely available.

On September 12, Costa spoke on a Forbes panel moderated by Moira Forbes about how technology is changing the fashion industry as part of New York Fashion Week. Costa drew parallels between e-gaming and fashion: brand experience, consumer shifts, and influencer markets are transforming traditional fashion and retail in much the same way that e-sports is transforming conventional sports.

As HOFF is staffed by volunteers, Costa asked that anyone in the legal profession interested in attending a training session and donating their time contact her at humans@humansoffashion.org.