Return to Fordham Law School
You are at:Home»Centers and Institutes»Just One Whack at the Piñata: The Importance of Comity in International Antitrust Policy

“Those of you who heard me speak last year may have picked up on the fact that I enjoy history,” joked Assistant Attorney General Makan Delrahim while opening his remarks at Fordham School of Law’s 46th Conference on International Antitrust Law & Policy. He and Isabelle de Silva, president of France’s Autorité de la Concurrence, gave the keynote address on September 12, the second day of the conference. He offered attendees a detailed look at the development of international antitrust policy throughout the 20th century, imparting wisdom from several of his predecessors, to stress the value of cooperation in competition policy. 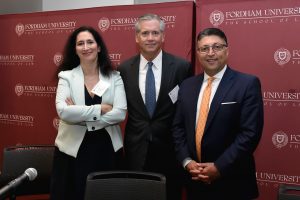 Delrahim cited a speech by former Assistant Attorney General Wendell Berge regarding the end of the Second World War, which he referred to as the “beginning of a new phase in modern history.” The idea holds water, both in and out of the context of antitrust law. As the United States began to turn its attention globally in the post-war boom years, international issues came to the fore in all areas of policymaking, including antitrust. “Antitrust had an important role to play in making sure that we did not replace military conflict with economic conflict,” Delrahim noted.

It took some years of unease, however. The United States’ Antitrust Division began working to eliminate cartels, which many other countries were initially hesitant to do, believing that cartel cooperation had been instrumental in post-war economic upturn. This led to years of economic conflict, during which, American businesses faced disadvantages in the global market.

In the 1950s, the tide began to turn. The Organization for European Economic Cooperation, which eventually became the Organization for Economic Cooperation and Development (OECD), published a guide on different country’s competition laws. Next, the OECD formed a committee on competition practices, which recommended cooperation between international enforcement agencies. Today, the International Competition Network (ICN), established in 2001, includes over 140 members.

“These multilateral organizations were not formed to pursue any specific policy goal. Instead, they were founded on the premise that regular conversations can identify the best answers,” he said. “Just as the truth will emerge from an open and transparent discussion of ideas, our hope and experience has been that a robust vetting of competition policies will produce the best practices.”

In response to those who call for competition policies to take into account issues of social welfare or other law, he stressed that policies furthering a particular national or political agenda would thwart consensus; for antitrust policy to be effective on an international scale, its focus must be objective, not political.

Delrahim also quoted former Assistant Attorney General R. Hewitt Pate, who cautioned, “A global antitrust system in which each agency simply lines up to take its whack at the piñata is not a model that is going to serve us, or the market, very well.” To maintain all that antitrust policy has achieved in the last 75 years, Delrahim emphasized the necessity of comity, having bolstered the case with references to other past assistant attorney generals, including Douglas H. Ginsburg and James F. Rill.

Just after his appointment, Delrahim led the Antitrust Division to establish what is now the ICN’s Framework for Competition Agency Procedures (CAP). CAP takes cues from other areas of international cooperation to foster productive dialogue. Dialogue, of course, is only the first step (though a crucial one); the ultimate goal is using that dialogue to create an agreed-upon set of basic procedures and a set of due process rights. Currently, over 70 countries have signed on to the initiative.

One key aspect of comity principles is the flexibility of application; it is important to note that comity does not denote legal imperialism, especially as its aim is to avoid unnecessary economic conflicts. Delrahim did reiterate that ultimately, the goal of the Department of Justice was to protect the rights of American consumers, and in a similar vein, that the Antitrust Division will not “play international antitrust cop where US commerce is not affected.” 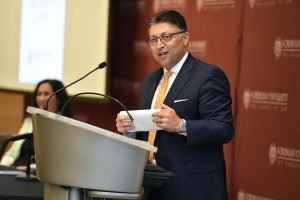 Now in its 46th year, the Fordham Competition Law Institute Annual Conference on International Antitrust Law and Policy and Antitrust Economics Workshop takes place over three days and brings together antitrust agency heads, senior officials from antitrust authorities, economists, leading attorneys from law firms and in-house legal departments, academics, and students of competition law from around the globe for one of the premier international conferences in antitrust law and policy. Topics of the 2019 conference included Big Tech and Antitrust, Industrial Policy, and Private Litigation Around the World, and continue through today with panels on Non-Horizontal Mergers and Managing Risk in the Digital Age. The Fordham Competition Law Institute is lead by Director James Keyte, global director of development for Brattle and Assistant Director Karen Hoffman Lent, partner at Skadden. To learn more about the conference and center, please visit law.fordham.edu/fcli.