Return to Fordham Law School
You are at:Home»Centers and Institutes»From Skepticism to Optimism: The Legacy of the Fordham-Ulster Conflict Resolution Program

In the early 1990s, the idea of a group of Catholics and Protestants from Northern Ireland sitting down together to discuss peaceful conflict resolution tactics seemed laughable, or worse, impossible. The Troubles—decades of brutal sectarian violence between those loyal to the British government and those who wished to rejoin the Republic of Ireland—had brought Northern Ireland to a breaking point. (The political split was also generally divided along religious lines—loyalists were almost entirely Protestant, while republicans were generally Catholic.) A few paramilitary groups had announced ceasefires and military and political leaders had begun attempting to enter into peaceful negotiations, but mistrust and fear between both sides loomed as menacingly as the propaganda murals that cover the buildings on Belfast’s Falls Road.

It seemed as if any resolution could be reached, it would have to be achieved at a great distance from such a fraught landscape.

After several days of quiet, almost non-conversation with each other, they opened up with frank discussions about what was occurring back in Northern Ireland. – Professor Jacqueline Nolan-Haley

In 1994, Fordham Law School’s Dean, John D. Feerick ’61, received a request to host a luncheon honoring John Hume, the leader of Northern Ireland’s Social Democratic and Labour Party. At the end of the luncheon, Hume approached Feerick, thanking him for hosting the event. “I want more from you,” he said frankly. “Please come and visit Northern Ireland.”

Around the same time, Feerick learned of a call for grant proposals from the United States Information Agency, seeking applications for conflict resolution programs in several countries worldwide, including Northern Ireland. Realizing this could potentially fulfill Hume’s request, he collaborated with Professor Jacqueline Nolan-Haley to craft a proposal. Their proposed program, the Fordham-Ulster Conflict Resolution Program, would bring together Northern Irish community leaders—social workers, union members, teachers, and more—from Protestant and Catholic communities together in New York, where 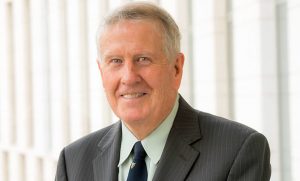 they would attend conflict resolution training sessions. The participants would tour conflict resolution centers in the city and, most importantly, they would engage in discussion in a neutral location, far from the fractious and divided counties of Northern Ireland, where a Protestant and a Catholic seen together could easily spell violence, either threatened or actual.

To bolster the strength of their proposal, they sought a partner in Northern Ireland. Feerick and Nolan-Haley contacted Seamus Dunne, head of the Centre for the Study of Conflict at Ulster University’s Magee Campus, who eagerly agreed to work with them.

They received a grant of $123,420 to fund the program—it was the only grant awarded for Northern Ireland. The following spring, a group of 22 individuals from Northern Ireland—11 Catholic and 11 Protestant—came to Fordham. “After several days of quiet, almost non-conversation with each other, they opened up with frank discussions about what was occurring back in Northern Ireland,” Nolan-Haley remarked. Several program participants told her that they would not have been able to have those conversations publicly back home. 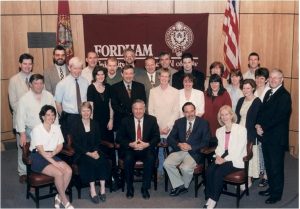 One of the participants told the New York Times that the visit to New York not only afforded them valuable mediation acumen, but a broader perspective on other fraught societies. Their visit to Rikers Island was cut short when an inmate smuggled a gun into the prison, and the program occurred concurrently with an Amnesty International report charging the NYPD for human rights violations. “Our problems are quite small on a global scale, and that’s a bit optimistic for us,” joked one participant. “You have so many problems here. In a sense, ours are more manageable.”

Those who participated in the program formed a group to maintain contact and continue cooperation after returning to their homes in Northern Ireland. Many of them retained a healthy dose of skepticism regarding the efficacy of alternative dispute resolution methods; one participant remarked, “Nobody’s going back evangelistic.” However, less than two years later, mediation tactics were key in creating the Belfast/Good Friday Agreement, which effectively ended the Northern Irish Troubles. (David Hume and the Ulster Unionist Party’s David Trimble were awarded the 1998 Nobel Peace Prize for their work on the Agreement.)

For me, the people in the program typified what was going on in Northern Ireland underneath the conflicts of the mid-1990s. These were people who wanted what we all really want: a peaceful society for our families. – Professor and Former Fordham Law Dean John Feerick

Remembering the program more than 20 years later, Feerick said, “For me, the people in the program typified what was going on in Northern Ireland underneath the conflicts of the mid-1990s. These were people who wanted what we all really want: a peaceful society for our families.”

Today, the spirit of the Fordham Ulster Conflict Resolution Program lives on in the law school’s most popular summer program, the Belfast-Dublin Program. It is the first American program to link educational institutions in Northern Ireland with ones in the Republic of Ireland, and participants spend one week in Belfast, studying human rights and conflict resolution at Queen’s University, followed by a week in the Republic at University College Dublin. The program was launched in 2001, and in the last ten years, it has expanded to include optional six- or seven-week externships (including positions with the Supreme Court of Ireland and the Lord Chief Justice of Northern Ireland) allowing students to get a firsthand look at the day-to-day operations of legal offices in another country.