Fordham Law professor and MacArthur “Genius” Award-winner Gay McDougall has been championing human rights within the UN for more than three decades. She has held several important positions, including as the first UN Independent Expert on Minority Issues. This post took her to over 17 countries to meet with heads of state, cabinet ministers, human rights organizations and most important, members of oppressed communities to learn and make recommendations about their law and policies around racial discrimination. She also was Special Rapporteur on the issue of systematic rape and sexual slavery practices in armed conflict for the UN Sub-Commission on Promotion and Protection of Human Rights from 1995 to 1999 and played a leadership role in the UN Third World Conference against Racism. 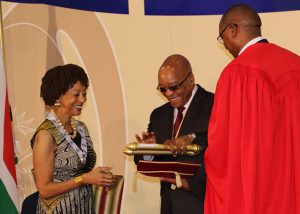 Professor McDougall was a member of the South African governmental body created to administer South Africa’s first democratic, non-racial elections in 1994, resulting in the historic election of President Nelson Mandela. Prior to that appointment, she served for 15 years as Director of the Southern Africa Project of the Lawyers Committee for Civil Rights Under Law, working closely with South African and Namibian lawyers to secure the release of thousands of political prisoners from jail and advance prospects of free elections. In 2015 the Government of South Africa bestowed on her their national medal of honor for non-citizens, the Order of O.R.Tambo Medal for her extraordinary contributions to ending apartheid.

Currently, she serves as Vice Chair of the UN Committee on the Elimination of Racial Discrimination. Her most recent work within this role has been looking into China’s detention of its Uyghur (Muslim) population for which she has been featured in a number of articles on this topic. In a recent article by The Globe Post, Professor McDougall is quoted as saying that Xinjiang, a region in China with more than 10 million Muslim Uighurs, has established “something resembling a massive internment camp that is shrouded in secrecy, a sort of no-rights zone.”

Click here to read the full article and learn more about Professor McDougall’s work with the UN on this pressing issue.

Additional media coverage on this topic:
Inside Chinese camps thought to be detaining a million Muslim Uighurs