Return to Fordham Law School
You are at:Home»International and Non-J.D. Programs»Behind the Crime: Inside the Whistleblower Process

On October 17, 2019, the Fordham Compliance Programs and Corporate Law Center hosted a talk by New York Times best-selling author Tom Mueller on his latest book, Crisis of Conscience: Whistleblowing in an Age of Fraud. Robert Mascola, senior director of compliance programs at Fordham Law, moderated the event, which was sponsored by the Forensic Risk Alliance. Mueller’s book is a collection of stories about brave individuals who took action against wrongdoing in their institutions. Elin Baklid-Kunz, a medical coding compliance expert profiled in the book, shared the stage to offer her personal insights as a whistleblower.

Mueller explained that Crisis of Conscience–seven years in the making–grew out of a meeting with a leading False Claims Act lawyer, who introduced him to this unique law that empowered citizens to file suits on behalf of the government to challenge corporate fraud. He says he took an interest in the human dynamics of whistleblowing: what motivated employees to go outside of their organizations to report illegal activity and fraud, and how others in the organization reacted when they did.

“These [human]  mechanisms–the loyalty and obedience on the one hand and a drive to truth and justice on the other–are the ultimate clash,” Mueller said. “I began to say, ‘Why was this important, why is this happening?’ because there’s a huge rise in the number of laws that protect whistleblowers and a huge rise in the incidence of whistleblowing and recoveries from whistleblowing. That’s where I began looking at the social, economic and psychological dynamics that are driving the whistleblowing process.”

To write the book, Mueller interviewed more than 200 whistleblowers and nearly 1,000 experts in a range of fields, including corporate fraud and national security. One of those whistleblowers profiled in the book was Elin Baklid-Kunz, director of physician services for Halifax Hospital Medical Center in Daytona Beach, Florida. When she discovered Medicare fraud being perpetrated by the hospital, she worked with federal authorities to stop it. Baklid-Kunz recounted how her multiple attempts to raise the alarm internally were all rebuffed. When she spoke with her boss about how the hospital was systematically overcharging the government, for example, she said he told her that her loyalty had to be with the hospital, not the government. When a year had passed and the problems still hadn’t been corrected, she made the decision to file a whistleblower complaint. 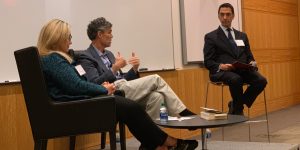 Baklid-Kunz called her decision a “choiceless choice” because innocent patients were being harmed by getting medically unnecessary, risky surgeries, and by being charged for services that were never provided. She didn’t want to be part of that. “My whole life was there [at Halifax Hospital]so to go against them, from a loyalty perspective, was horrible,” she explained. She was also concerned about not blowing the whistle, thinking that if someone else did, she could be legally liable for the hospital’s fraud. “You go through the stages of being angry that you want someone else to do it and then [you get]to the point where you’re that somebody.”

The case was originally filed under seal, meaning that the suit was not public information. To her surprise, a year later the seal was lifted and Baklid-Kunz knew that it was just a matter of time that her colleagues at Halifax Hospital would find out that she had filed the suit.

After she was identified, Baklid-Kunz said everything changed. Her computer access credentials changed; her peer reviews tanked; and she found herself being excluded from meetings. In those meetings that she was invited to, people would rarely sit next to her. But she kept doing her job. “I made sure I went to work every single day,” she added. “I knew if I didn’t go to work one day, the next day would be so much harder and I knew I had to power through it.” The worst part, according to Baklid-Kunz, was the way in which her friends were treated. Attempts to keep up their friendships with Baklid-Kunz subjected them to retaliation, and there was no whistleblower law to protect them. So, friends were pressured to disassociate themselves from Baklid-Kunz, even outside of work. 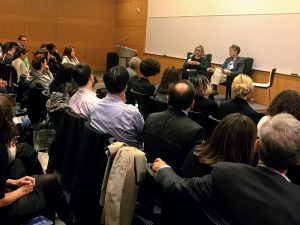 In 2014, Halifax settled the matter with the U.S. Department of Justice by repaying $86 million to Medicare. Though Baklid-Kunz ultimately received a portion of that settlement–and many consider her case a success–she said that it was a “bittersweet” ending to the episode. “It doesn’t feel successful when the people doing the wrongdoing are still doing it,” she said. “That’s the part that is so hard to deal with.”

The experience of Baklid-Kunz was typical in many respects, according to Mueller. Most whistleblowers face crushing retaliation and suffer deep financial and personal hardship. Most lose not only their jobs, but also the chance to work again in their profession. Baklid-Kunz was fortunate to have recovered a whistleblower reward that helped make up from the lost income from not being able to get a job with other health care systems. Mueller pointed out that most are not so fortunate: only a small fraction of whistleblowers get any financial reward.

When Mascola asked about the implications of his research for compliance programs, Mueller emphasized the importance of allowing whistleblowers the right to remain anonymous. “In the ideal world, we wouldn’t even need [a]  compliance [function]… but in the real world, in the kinds of organizations I focused on with the level of toxicity, and systematic illegality… anonymity is the only way you can stay employed.”

Baklid-Kunz offered another lesson for those in the compliance field. She blamed the check-the-box compliance program at Halifax for the problems that she ultimately exposed. “Unless you have a compliance officer that has the authority to make a change” in the face of wrongdoing, then having a compliance function at all is “dangerous” because it can create a false sense of legality and compliance. Baklid-Kunz also noted that if her boss and others at Halifax had taken her concerns seriously when she raised them directly, they would have avoided the large fines, not to mention the millions spent on legal fees and harm to its reputation. “If compliance works, all of that could have been prevented.”