“What I loved about that group was their teamwork. As soon as the judge recessed before closing arguments, all four students immediately huddled together around counsel’s table. Only one would be closing, but each one was 100-percent engaged and committed to winning the case,” said Adam Shlahet, director of the Moore Advocacy Center. “A moment like that confirms, to me, that competition is the best way for students to ‘get’ the focus and intensity of being a real trial lawyer.” 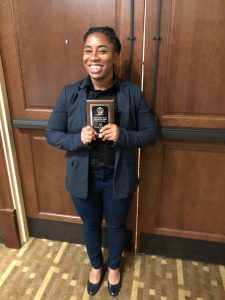 Out of a pool of 96 student advocates, the Brendan Moore Center’s Editor-in-Chief Aishling Fitzpatrick won Best Cross-Examination at Faulkner’s Mockingbird Competition. She was coached by Brit Russell ’13 and Rob Iodice ’16.

Mary Parker, who was advised by Joe Bianco and Krystyn Tendy ’09, won Best Cross-Examination at the Syracuse National Trial Competition, held October 11 to 13.

During that same weekend, the Fordham team made it to the semifinals in the University of Florida’s Criminal Trial Competition. Mike Higgins ’08 and Greg O’Brien ’18 coached Eartha Jn. Baptiste, Caen Dennis, Michael Lovitch, and Nicole Rubin.

Looking ahead, six Fordham teams will attend five more competitions before the semester ends. Fordham Law will also host the upcoming 2019 Judge Paul Joseph Kelly, Jr. Invitational Trial Competition from November 15 to 17 at the Lincoln Center campus and at the Southern District of New York Federal Courthouse. There, law school teams will prepare both sides of a federal criminal problem.