The first time tennis legend Billie Jean King sat down to speak with the late Indiana Senator Birch Bayh, she thanked him profusely for all he’d done for women. Bayh was King’s hero for his role in drafting Title IX legislation and championing the Equal Rights Amendment (ERA).

Bayh, who passed away in March, is remembered by many for his landmark work to protect women from sex discrimination and for being the only other person besides James Madison to draft more than one constitutional amendment — the 25th and the 26th.

His legacy was celebrated at a program hosted by Fordham Law School that featured King, Bayh’s wife Katherine, and John D. Feerick ’61, Norris Professor of Law and dean emeritus at Fordham Law School, among a host of speakers. Feerick worked alongside Bayh to draft the 25th Amendment, which established procedures for presidential succession and removal for inability to carry out the powers of the office. The two subsequently worked on an amendment to abolish the Electoral College that nearly succeeded, and collaborated on programs involving constitutional issues, including a symposium at Fordham Law in 2010.

The program, which was titled “Celebrating the Impact of Senator Birch Bayh: A Lasting Legacy on the Constitution and Beyond” and took place on October 16, was split into three panels. The first focused on women’s rights, the second on the 25th and 26th Amendments and Electoral College reform, and the third on other major aspects of Bayh’s legacy, including the Bayh-Dole Act, which revolutionized ownership of federally funded intellectual property. 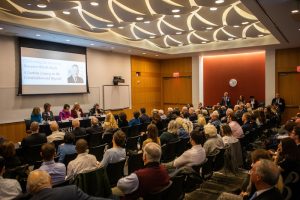 “Before 1972, there were always classroom quotas,” King said, referring to discriminatory university policies that limited enrollment of women in courses and graduate programs prior to the advent of Title IX. “It’s just amazing that we had to worry about that.” Due to Bayh’s work on Title IX, opportunities for women have expanded significantly and made gender equality in education much more possible.

King described to the 100-plus attendees in personal terms how she needed to work a job while going to college since she wasn’t awarded a tennis scholarship, as her male counterparts were.

One of the questions posed by moderator Linda Klein, a past president of the American Bar Association (ABA) and senior managing shareholder at Baker Donelson Bearman Caldwell & Berkowitz, was why Bayh’s proposed Equal Rights Amendment has yet to be ratified. Jessica Neuwirth, a lawyer and women’s rights activist, detailed the complexities involved in passing a constitutional amendment, which requires ratification by 38 states to be added to the Constitution.

“Next year is the 100th anniversary of women’s suffrage,” Neuwirth noted. “And it would be fitting if we finally got all the equal rights in the Constitution.” The panelists all agreed that one of the most important aspects of Bayh’s legacy would eventually come in the form of the passing of the ERA, which could potentially happen as soon as 2020.

One of the panelists, Lowell Beck, former assistant director of the ABA’s Washington office, lauded Bayh as a senator who “knew the importance of working across the aisle, of working in a bipartisan way.” He described Bayh as someone who would approach anyone — even those with opposing views — and would hash out a way to make legislation work for both of them.

“A young senator who was the only senator since the founding fathers to author two constitutional amendments — that was quite a thing. This was the thing of legends,” Beck said.

When Dean Feerick spoke, he recalled how Bayh gave him a chance when he was a young lawyer. Feerick had been very interested in the subject of presidential disability, publishing an article in the Fordham Law Review on the subject only a month before the Kennedy assassination. It received notice by the ABA and landed Feerick an invitation to a special conference on presidential disability that the assassination prompted. Feerick met Bayh at the conference and later had the opportunity to work with him on the 25th Amendment.

“He took me, a young lawyer, seriously. He asked me for my views when I was a nobody, an ordinary guy,” Feerick said of their work together.

Vermont Senator Patrick Leahy, who was unable to attend the panel, prepared a video statement for the event. “He could work with Republicans and Democrats,” Leahy said in the video. “And, he followed the rule that all senators followed back then: He always kept his word.” In closing, Leahy observed, “We should have more senators like him.”

Katherine Bayh was the final speaker. She began by telling the audience that her husband would have been humbled by the outpouring of love for her late husband. “He spent 18 years [as a Senator]living his life exactly how he wanted to,” she said. She also spoke about how her husband knew that the future of the country “was in the students, not with him.”

“When I reflect on the essence of the man … I cherish him not only as a husband, but as a father and a grandfather,” Katherine concluded the panel. “The hallmarks of the man were his love, his kindness and that he was a man of no argument and no complaint.”

Above, panelists and speakers celebrate the legacy of the late Senator Birch Bayh.