As she took the stage at Fordham Law School to accept the 2019 Fordham-Stein Prize, New York’s Solicitor General Barbara D. Underwood reflected on a lifetime breaking barriers for women in law. The first woman to ever hold the office of attorney general of New York, Underwood noted the value of different perspectives, informed by diverse life experiences.

“That’s one of the most important challenges of our times,” said Underwood. “To bring into the courts and the law firms, the boardrooms and executive suites, in business and in government, in the academy and in all the institutions of our society many different perspectives so that we can build the bridges that are needed to unite rather than divide our large and diverse state and our even larger and more diverse nation.” 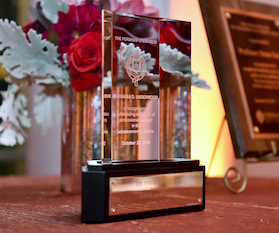 The Fordham-Stein Prize is awarded annually to leaders in the legal profession.

In his introduction of Underwood, Dean Matthew Diller spoke about her landmark career and impact on the legal community and beyond.

“Throughout her extraordinary, pioneering legal career, Barbara has displayed an unwavering commitment to equal justice, and the rule of law—with a rare combination of brilliance and modesty,” said Diller. “She never sought attention or accolades—she just did what was right and fair.”

Dean Diller went on to describe her influence as a legal mind and one of the nation’s leading Supreme Court advocates, who has argued before the U.S. Supreme Court 21 times.

“Barbara Underwood is a lawyer’s lawyer. She embodies the highest standards of the legal profession, promotes the advancement of justice, and acts as a fearless trailblazer for women in the law. And for that, we are thankful.”

Underwood has been New York’s solicitor general since 2007, with the exception of May to December of 2018, when she served as New York attorney general. Throughout a distinguished and illustrious legal career, Underwood has served in numerous high-level legal positions at the local, state, and federal levels. Prior to her tenure as solicitor general, Underwood served as principal deputy solicitor general of the United States, and was the first woman to be appointed as acting solicitor general. She was previously chief of appeals and counsel to the Brooklyn district attorney and senior executive assistant for legal affairs for the Queens district attorney, as well as chief assistant and counsel to the U.S. attorney for the Eastern District of New York. 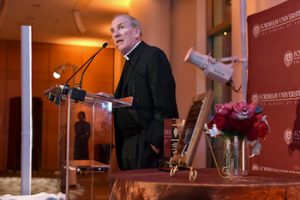 “This evening, we honor one such person: a quiet and steady heroic figure who has devoted her life to championing and shoring up the ideals and visions on which the Republic was founded, and which have served it throughout its long history: Solicitor General Underwood,” said Father McShane. “For your whole professional life, you have served the law and the democratic process without fear nor favor. Therefore, solicitor general, you are a hero. A hero for our times.”

The Fordham-Stein Prize is awarded annually to a member of the legal profession whose work exemplifies outstanding professional conduct and promotes the advancement of justice. From its inception in 1976, the winners of the prize have been men and women with distinguished careers who reflect a profound commitment to the public good. Past winners include nine Supreme Court Justices; four former United States Attorneys General; three former Secretaries of State; and leaders of the bench and bar.

“Thank you to the Fordham Law School, the selection committee that chose me for this award, and the Stein family who are sponsoring it,” Underwood told the audience. “I am deeply honored to receive it and join an illustrious group of people who have received it before me.”

Read more about the Fordham-Stein Prize and submit a nomination for 2020.