Return to Fordham Law School
You are at:Home»Law School News»Debating the Impact of Urban Intelligence on Personal Privacy

As apps, websites, and private companies collect, track, and store user data, thorny issues have emerged in balancing privacy considerations and the preservations of legal rights against the benefit of services rendered.

On October 25, 2019, the Fordham University School of Law Urban Law Journal hosted the 11th Annual Cooper-Walsh Colloquium, a forum for top thinkers in multiple disciplines to exchange their analyses of legal, economic, and social issues that affect urban areas. This year’s colloquium, titled Urban Intelligence and the Emerging City, was comprised of a series of panels on the evolution of urban intelligence and its interplay with public safety, governance, and social services. Urban intelligence is the way cities can make more informed decisions based on feedback between individuals and the urban environment via data analytics, machine learning, and artificial intelligence.

Nestor Davidson, faculty director of the Fordham Urban Law Center, moderated a lively panel on how urban intelligence interacts with the built environment. The participating panelists acknowledged that, while urban intelligence may empower cities to improve efficiencies in areas like infrastructure, sustainability, and social services, its increasing use implicates a multitude of rights, including privacy, due process, and equal access. As users and consumers of urban intelligence, citizens face unavoidable growing pains, particularly by way of the use of data, which may potentially reflect racial, gender, economic, and ethnic biases.

Panelists Bilyana Petkova and Ira Rubenstein gave a glimpse into their draft book project, tentatively titled Governing Privacy in a Datafied City, which looks at the role cities play with regard to privacy protection. Their work focuses on non-law enforcement issues specifically on data sharing agreements between city agencies and those with the private sector. Some of their case studies include looking at the 2020 Census citizenship question on Census Bureau surveys, cities’ regulations on home sharing entities like Airbnb and HomeAway, and Google subsidiary Sidewalk Labs’ plan to turn Toronto’s Lake Ontario shoreline into a “smart district.”

Rubenstein, a senior fellow at the Information Law Institute at NYU School of Law, suggested that privacy is an individual, social, and urban value. “Part of the point that we’re making is that, as cities begin to encounter these new data arrangements and enter into agreements — particularly with the private sector — they need to maintain a level of anonymity and privacy, [and]really [with]all the public spaces that we count on for cities to be dynamic and vital,” he said.

Petkova, an associate scholar with the Yale Information Society Project, also elaborated on how cities have a choice of leveraging or trading public power to protect personal information when developing their urban policies; however, fiscal funding often restricts that choice.

Rubenstein presented the fact that cities are empowered to manage their own data, have ample power to regulate privacy, and can try to provide better services through data analysis. Yet they’re sometimes “lured into commercial deals that end up selling out privacy in exchange for other apparent benefits.”

Olivier Sylvain, director of the McGannon Center for Communications Research at Fordham Law, countered that the city isn’t necessarily the decisive site wherein we should think about data protection and other policy priorities. Sylvain defended his position, saying that all cities are not the same since they’re comprised of boroughs and neighborhoods that have different interests, geographies, and constituents. “This doesn’t mean that cities don’t matter — I think cities certainly have a role to play,” he clarified.

Sylvain emphasized that data protection is a vital matter that needs to be on people’s minds and that cities and district attorneys can be data activists and defendants. He also rhetorically asked if this matter, in the grand scheme of things, is really about “good old-fashioned, hard policy decision-making” instead. 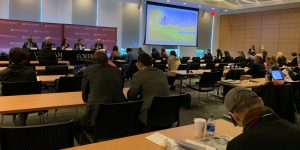 James Koenig, co-chair and partner of Privacy & Cybersecurity Practice at Fenwick & West LLP, observed that notification of how personal information will be used might not be a top concern for the average citizen. Rather, an individual may simply want ways to communicate and interact that are anonymous and not tied to identity. “So, relevancy, as opposed to privacy, may become the discussion in the long term,” he said.

In the same vein, Davidson provided a personal example, explaining that he planned to use One Metro New York (OMNY), MTA’s new “tap and go” fare payment system, on his phone while commuting. He acknowledged that this means MTA and Apple would likely know tremendous details about his commuting habits. “That’s fine for me, if it works, because it’s going to be convenient to use my iPhone. That’s a tradeoff I’m willing to make, but I probably have no idea of the potential harms,” Davidson said. “Perhaps one of the things we could do is not just think about relevance, but think about a more sophisticated conversation about the harms.”

Near the end of the conversation, a majority of the panelists agreed that more education and simplified, common literature are needed if more people are to understand this important, complicated topic. Articles and responses developed at this year’s colloquium will be published in the Cooper-Walsh issue of the Fordham Urban Law Journal in the spring of 2020.