Return to Fordham Law School
You are at:Home»Centers and Institutes»Law in the Age of the Information Economy

The rise of capitalism and the market economy in the 19th century sparked intense political and social upheaval, leading to the establishment of many of today’s legal institutions and precedents. However, as the market economy has begun to give way to the emerging information economy, a host of new challenges has emerged. 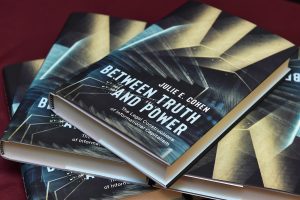 In Between Truth and Power: The Legal Constructions of Informational Capitalism, Julie Cohen, Mark Claster Mamolen Professor of Law and Technology at Georgetown University, provides an overview of the changes and challenges wrought by the information economy. The book explores how key players have used the law to create systems that aid the information economy’s growth, often at great cost to the individual consumers who are obligated to participate.

Cohen joined Solon Barocas, assistant professor of information science at Cornell University, and Ari Waldman, visiting professor of information technology policy at Princeton and founding director of the Innovation Center for Law and Technology at New York Law School, for a wide-ranging discussion of legal issues and technology advances at Fordham Law School on November 20. Professor Olivier Sylvain, director of the McGannon Center for Communication Research, moderated the discussion.

One part of the project of Between Truth and Power, Cohen said, is to offer a new way to view the relationship between the law and the information economy. She noted many think of the relationship as “the collision between an irresistible force, which is tech, and a tired, old, immovable object, which is law.” She cautioned listeners against subscribing to this narrative, citing an adage she uses with her students: “law is tools, not rules.”

Citing political economist Karl Polanyi’s 1944 book, The Great Transformation, Cohen referenced an earlier shift in market economics as an illustration of the interplay of law and the economy. In his book, Polanyi outlines the rise of the capitalist, industrial economy, a shift during which “patterns of economic exchange became detached from their local contexts and resituated in the constructed idea of the market,” according to Cohen. The new industrialists utilized law to advance their purposes in establishing a self-regulating market economy. This shift also marked the emergence of the commodification of labor (i.e., people) as a resource. Later, Cohen noted, one can also track the creation and rise of protective countermeasures enacted to combat this commodification—such as early worker protection legislation and bank regulation.

The rise of the information economy marks another paradigm shift, according to Cohen, and how the law has been adapted to augment its rapid expansion is the main focus of her book. Resources have become dematerialized and “datafied,” and economic patterns have moved from the market to online platforms. What costs does this transformation have for human well-being? With this shift from a market economy to an information economy, Cohen hopes to see the rise of protective countermeasures similar to those that emerged during the rise of the market economy.

Collection of personal data was a persistent theme in the discussion. “We entrust our data to [companies like Amazon and Facebook],” Waldman noted, “And sharing is a function of trust.” However, though the relationship between the public and these companies ought to be a fiduciary one, it is not, Cohen cautioned, and the companies with which we are often obligated to entrust our information usually have no legal obligation to protect it. Waldman echoed her, warning listeners that currently “the onus of protecting our data is entirely on our shoulders.”

However, protecting one’s data could lead to what Barocas referred to as an “autonomy paradox.” “Individuals don’t know enough or have the capacity to manage their own privacy and they want to shift the burden to someone else,” said Barocas. “But, in order for these platforms to do so, they must further invade the individual’s privacy to collect more information to better understand their interests.” 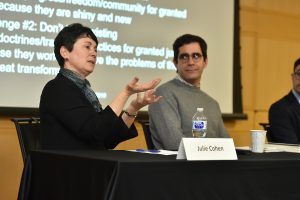 Though the discussion raised more questions than answers, Cohen’s project captures the law not as an “old, tired, immovable object,” but as an adaptable set of tools. She cautioned readers and listeners not to view the attributes of existing legal institutions as “carved on tablets of stone.” Many of the attributes of the institutions of the modern U.S. legal system, for example, only became established in the early- to mid-20th century as a response to problems posed by the rise of the market economy. From there, she issued two challenges: first, not to accept without question the promises of innovation and progress simply because they are new; second, not to accept without question existing doctrines and traditions simply because they functioned to solve the problems of the last great economic transformation.

Barocas lauded the book, saying it “puts together a lot of pieces that make sense,” and provides a “sweeping argument” taking into consideration many of the issues that have emerged with the rise of informational capitalism. With Between Truth and Power, Cohen has laid the groundwork for future study. Said Waldman, “Julie’s work opens up a door for more lawyers and sociologists to dive into this work further.”

The discussion was presented by the McGannon Center and the Leitner Center for International Law and Justice. It was the final event for the Fall 2019 semester in Professor Catherine Powell’s Digital Civil Rights and Civil Liberties Seminar.