On December 2, 2019, Fordham Law School hosted an event celebrating the 10th anniversary of New York State Attorney Emeritus Program (AEP), an afternoon of reflection on the first decade of the program in the context of pro bono service and access to justice in New York and around the country.

AEP was founded in January 2010 during Lippmann’s administration. DiFiore noted in a keynote address that at the time, more than 2 million people were unrepresented before New York courts. Around the same time, there also was a “silver tsunami” of baby boomer attorneys approaching retirement. AEP was founded to address the gap in  accessible legal services for low-income New Yorkers while providing opportunities for senior attorneys.

Lawyers age 55 and over may volunteer with AEP, whether or not they are retired. They are paired with legal services organizations that provide training, supervision, and malpractice insurance. Retired attorneys in the program are exempt from New York’s CLE requirements and registration fee. Practicing attorneys are not exempt from these requirements, but can earn up to 15 CLE credits through AEP pro bono service in a reporting period.

According to Fern Schair, the Feerick Center’s Advisory Board Chair, the idea for the AEP originated when the center’s summer interns were researching programs available for senior lawyers. Schair and Dora Galacatos, Executive Director of the Ferrick Center, approached Lippman to propose a pro bono program for retired attorneys. 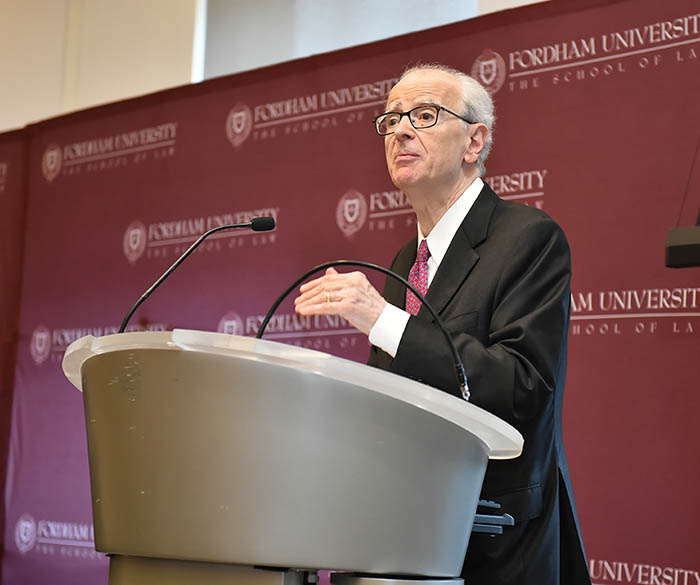 “Whatever they say, I say yes to,” Lippman noted in his remarks. “I knew this was something we had to do.”

According to Schair, “there were more alumni from Fordham than any other school” volunteering when AEP began. She says there is still a very active Fordham Law contingent. Throughout the program’s history, Schair says the Feerick Center has provided infrastructure and “legwork” in areas including recruiting, training, and matching volunteers with organizations.

AEP has grown in its first decade from 42 participants to more than 2,000, DiFiore noted. Today, the top 106 volunteers have combined to contribute 12,000 hours volunteering with 28 organizations. DiFiore said the volunteer time of those core volunteers is worth nearly $3 million in billable hours.

As Dean Matthew Diller noted, AEP volunteers are “incrementally beginning to erode the access to justice gap in New York.” He praised volunteers’ “desire to give and give back to the profession and the system.”

AEP volunteers handle “virtually every type of legal matter,” according to DiFiore, “from losing one’s home to dealing with the real and pressing threat of violence in one’s home.” For example, DiFiore and other speakers mentioned housing, immigration, consumer debt, family issues, as examples of other practice areas  AEP volunteers are engaged in..

During one of the afternoon’s panels, AEP volunteers and representatives of legal services organizations discussed their experiences with the program. They described the enthusiasm and professionalism of AEP attorneys serving in a variety of roles, from direct advocacy for unrepresented individuals to training law students and junior lawyers.

“I had practiced in family court my entire career,” said Fordham Law alumnus Jeremiah Quinlan. In his practice where he  represented agencies, he knew the judges, court officers, and other lawyers in the field. As he approached retirement, he said, “I couldn’t see myself sitting home every day, working out, playing golf.” About five years ago, he began taking pro bono consumer debt relief cases through AEP and found the experience to be “very rewarding.” Now, he  his family law background volunteering with the Children’s Law Center is very helpful.

For more information about the AEP, including how to volunteer, see http://ww2.nycourts.gov/attorneys/volunteer/emeritus/index.shtml.