Return to Fordham Law School
You are at:Home»Faculty»I Swear: The Meaning of an Oath by Joel Cohen (with Dale J. Degenshein)

When we take an oath, what duties do we have to the person, or people, to whom we make our promise? Many people consider an oath an unbreakable vow. Sometimes, however, keeping an oath could present a risk, whether loss of life or a miscarriage of justice. In what situations, then, is it acceptable—or even necessary—to violate an oath? 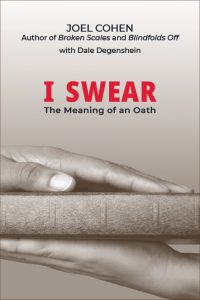 In his new book, I Swear: The Meaning of an Oath, Fordham Law Adjunct Professor Joel Cohen examines oaths taken by 11 different Americans throughout history, including a journalist, a priest, a doctor, and a Mafia “made” man. Each chapter recounts the story of the key player, the oath—or oaths—they swore to uphold, and the consequences of keeping or violating those oaths. Each anecdote is followed by discussion section analyzing the oath-taker’s motivations and actions.

In one of the book’s most salient chapters, Cohen examines the presidential promise to “preserve, protect, and defend the Constitution of the United States.” The chapter discusses President Franklin Delano Roosevelt’s presidential oath to protect the country in the context of Japan’s bombing of Pearl Harbor. Some historians argue that Roosevelt had advance knowledge of the attack. Cohen explores whether Roosevelt may have violated his presidential oath if he was aware of the impending attack and did nothing to preempt it.

I Swear also recalls the conundrum of the two oaths taken by CIA Officer Richard Helms, who swore to “forever keep secret” any information he gleaned on the job. In 1973, he would break that oath when he took an oath before the Senate to tell the truth under penalties of perjury when asked about the CIA’s role in the Chilean coup d’état earlier that year.

Cohen opens the book with a quote from Aeschylus: “It is not the oath that makes us believe the man, but the man the oath.” Given the current debate over constitutional authority and presidential abuse of power, Aeschylus’ words are all the more prescient. Embedded in the presidential oath is the duty to “put aside his or her private interests—the only interest is that of the country,” writes Cohen. “Consider that in terms of complaints about the current president.”

The foreword introduces the book as an entry point for further discussion of oath-taking and -keeping, a subject that will likely crop up with increasing frequency as America moves into the 2020 election season.

I Swear: The Meaning of an Oath is available from Vanderplas Publishing.