Return to Fordham Law School
You are at:Home»Alumni»“The Capitol’s Been Breached”: Rep. Thomas Suozzi ’89 Shares His Harrowing Account of the January 6 Insurrection

“I remember the Capitol Police came up and said, ‘We need you to get under your chairs and take out the gas masks that are under there,’” recalled Rep. Thomas Suozzi ’89 in a Zoom conversation with Dean Matthew Diller. “‘The Capitol’s been breached.’” 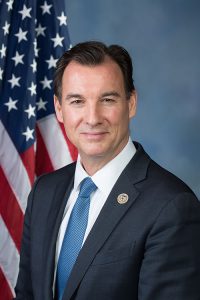 Suozzi, who represents the 3rd District of New York, was one of the congressmen trapped in the House Chamber on January 6, the day a mob of Trump supporters violently stormed the United States Capitol in hopes of overturning the election, resulting in five deaths. On January 25, he spoke with Dean Diller over Zoom about his experiences at the Capitol during the insurrection, and how Congress—and the country—can move forward. The webinar, “The Attack on the Capitol: an on the Ground Report and What’s Next,” was open to members of the Fordham community who were invited to ask questions about the fateful day.

“I couldn’t believe this was happening in the United States of America,” Suozzi said.

Regardless of the violence that day, Suozzi said there was no question in his mind that Congress should continue to certify the results of November’s presidential election, the job they had met that day to complete. “It would send the worst message in the world that we were intimidated by that violent mob, that we were not going to fulfill our constitutional duty,” he explained. “So, we got back in there that night at about eight o’clock and went until three o’clock in the morning, and got it done.”

Both Dean Diller and a number of the attendees asked Suozzi about President Trump’s accountability for the attack, which is proving to be a thorny topic as the impeachment process plays out. When asked if he considered the January 6 insurrection to be act of domestic terrorism, Suozzi answered, “Yes, no question about it.” He also averred that any elected officials who had directly influenced the attack should be investigated.

Throughout the discussion, Suozzi stressed the importance of empathy and of understanding the different backgrounds of one’s colleagues and political opponents. He also stressed the issues of disenfranchisement and disengagement as being the key contributors to the rise of more extreme players on both the left and the right. Suozzi is not only a member of the House Ways and Means Committee, but he also serves as vice chairman of the Problem Solvers Caucus, a group of 28 Republicans and 28 Democrats that meets on a weekly basis to work towards bipartisan cooperation on legislation.

In closing, Suozzi offered some parting advice to the Fordham Law students: “All the things that you learn about values—from kindergarten through law school—really matter,” he exhorted. “Your values will never abandon you.”