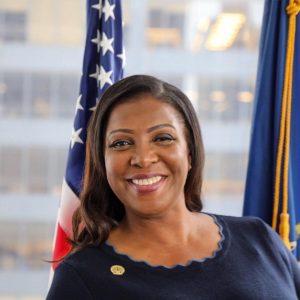 In her remarks, James commented on recent primary and general elections in New York State. “While New York considers itself a bastion of progress, for far too long we have failed to protect and promote the sanctity of the elected franchise. Even now the state continues to have one of the lowest voter turnout rates and highest absentee ballot rejection rates in the country,” James said.

“Nevertheless, there is a clear reason for optimism,” she continued, noting how New York made strides towards modernizing and expanding voter access and voting rights—including early voting, absentee ballots, and pre-registration for 16 and 17-year-olds. “Even with relief from the pandemic in sight, New York will need to continue to evolve its election systems to defend the right to vote—a right that is preservative of all other rights in a democracy.”

Following James’ address, a group of preeminent election law experts—composed of leaders, scholars, and journalists—discussed proposed election reforms and how institutions and legal frameworks can be modified to ensure free and fair elections for all. They also summarized the content of their respective articles on the subject, which will be published in the Fordham Law Review‘s upcoming 90th volume.

“Obviously, this topic has been in the headlines for the past several months and it’s been an unprecedented situation in many ways,” said Executive Symposia Editor Daniel Meagher ’21, referencing the tumultuous 2020 election season and the violent aftermath that occurred in the U.S. Capitol in early January.

“I know ‘unprecedented’ is a buzzword that’s been thrown around a lot this past year, but we’ve truly never been in this situation where the institutions surrounding our elections have been under such attack.”

“Up until this [election], I think most people in the United States felt we had a very robust electoral process—a fair electoral process for the most part—and one that we could rely on for peaceful succession,” Goldfeder said in his opening remarks, noting that—up until this past election—10 incumbent presidents had accepted the results after losing their re-elections.

Together, the 11 experts tackled subjects like the electoral college, the popular vote, and the role of state legislatures in American presidential elections; how voting and ballot access are keys to democracy; proposals that deal with what happens when presidents and vice presidents are unable to fulfill their duties; and electoral transparency, the Supreme Court and how to reduce litigation in election law cases.