Lochan’s story, “F(A.I.)LIED US,” followed Melanie, an attorney of color, as the court’s facial analysis technology for security screening failed to recognize her while a white male colleague passed through without incident. At the end of the story, Melanie’s client received an unfair sentence from the A.I. sentencing software, despite mitigating circumstances. 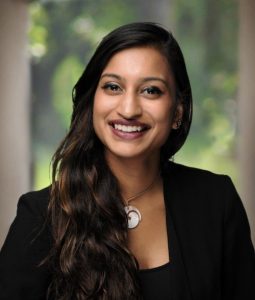 Lochan drew from her own experience during the summer after her 1L year when she interned for a family defense legal services organization. As a woman of color, she noticed that she often received additional screening at the court entrance while interns who were white did not appear to be singled out in the same way.

“Court officers would mistake me as a client rather than an attorney,” Lochan says.

“It reminded me of in my professional responsibility class my 2L year we had this conversation about biases in law,” she said. “This was a creative opportunity to talk about it.”

Lochan says that her experience in using fiction to make observations about human behaviors is rooted in her undergraduate work in anthropology, where she often took a creative approach to writing not often available in legal writing. “I wrote the story in about two hours,” she said. “It just flowed so quickly. It made me think about the law in a way I hadn’t thought of in a while.”

The themes of human interactions with technology were also inspired by her experience with remote learning during the pandemic. “Something this semester has lacked in is human connections,” she said. “All of this feels surreal.”

Currently, Lochan is a semi-finalist for a Fulbright Scholarship. If she receives the scholarship, she hopes to earn a master’s degree in indigenous studies in New Zealand. Looking ahead, she eventually pictures herself in a “JD advantage” position where her law degree would be a benefit, though not required, allowing her to combine her background and creativity with her interest in law.

“This made me feel as though law and creativity could live hand-in-hand,” she said.

The competition was co-sponsored by the Access to Justice Tech Fellows and LexBlog. All of the entries are available to read on the ABA for Law Students website.