The Fordham Law community is mourning the passing of Professor Gail D. Hollister ’70, longtime Archibald R. Murray Professor of Law and Murray Professor of Law Emerita. Hollister was a member of the Fordham Law faculty for 40 years—from 1977 until her retirement in 2017. She was chosen by Dean Emeritus and Norris Professor of Law John D. Feerick ’61 to serve as the first leader of the newly created student affairs office while serving as a full-time faculty member. Hollister was also named director of legal writing in 1982, was the first holder of the Archibald R. Murray Chair of Law, and was named the first associate dean of administration in 2001. She also proudly served as an advisory board member of The Feerick Center for Social Justice, beginning in 2017. Hollister died on April 29 at the age of 75. She is survived by her husband, Edward G. Williams, her son, Gregory P. Williams, and her daughter-in-law, Sarah R. Williams.

“Gail spent virtually her whole adult life at Fordham Law—as a student, member of the faculty and associate dean,” said Dean Matthew Diller. “One of her most admirable qualities was her devotion to the students, putting them first and always being there with her office door open to answer students’ questions.”

“Gail has earned accolades from students over the years for her brilliance, for knowing tort law inside and out, and for her ability to respond to students’ questions with clear examples,” he continued. “She was a consummate teacher of law and a wonderful colleague, and she will be sorely missed by all.” 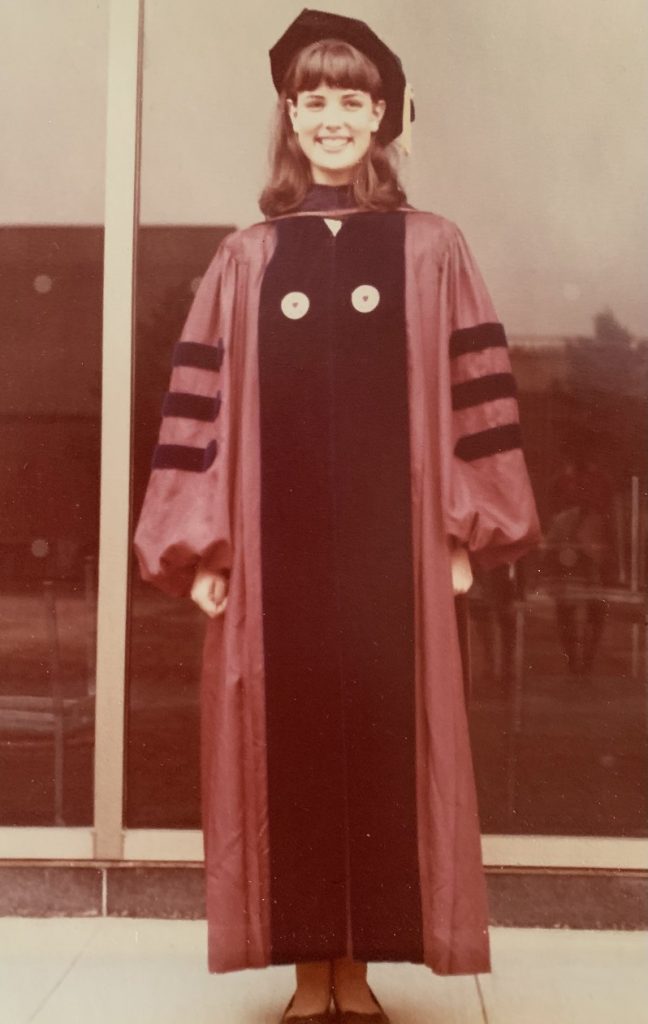 Professor Hollister on her graduation day from Fordham Law School in 1970. Photo: Courtesy of Gregory Williams.

Hollister majored in political science and graduated from the University of Wisconsin in 1967. She earned a J.D. from Fordham Law in 1970 and was a member of the Fordham Law Review and the Law School’s social committee.

After graduating from Fordham Law, Hollister clerked for the late Judge Inzer B. Wyatt, U.S. District Judge for the Southern District of New York. Hollister later was an associate at Webster, Sheffield, Fleischmann, Hitchcock & Brookfield, and practiced at Merrill Lynch, Pierce, Fenner & Smith where she specialized in securities regulation.

Hollister joined the Fordham Law School faculty the fall of 1977 under the leadership of Hon. Joseph McLaughlin, who served as dean from 1971 to 1981.

At that time, the Law School had fewer than 25 full-time faculty members and only three members on the administrative staff (the dean, assistant dean, and registrar). Hollister was the third woman to join Fordham Law’s full-time faculty (the first two being Professors Lucille Buhl and Sheila Birnbaum) and the second woman to be granted tenure at Fordham Law (the first being Professor Sheila Birnbaum).

Teaching was Hollister’s passion, and she taught a number of courses at Fordham Law—including Legal Writing, Legal Process, and Torts—and specialized in Torts, Negligence, and Malpractice. She made an indelible impact on her students. Martin West ’14 and Emily (Seiderman) West ’14, who both took Hollister’s Torts class during their 1L year, recently remembered her fondly. “Your course was a wonderful introduction to the legal profession and Fordham was lucky to have you,” they said. “Thank you for your wit and wisdom.” 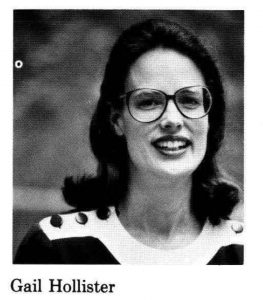 For decades, Hollister was considered the trusted “go-to” person at the Law School by the faculty and the administration. She was known for her quiet determination, dedication to her work, and humility. In a letter to Hollister on her 75th birthday, Dean Feerick wrote, “You truly have personified in your life as a Fordham lawyer the caring, compassionate, and service values of the school, with excellence, integrity and concern for all.”

“When I think about your virtues, the words that come to mind are ‘kindness, integrity, sense of duty and responsibility,’” wrote Hollister’s longtime colleague and friend Professor Helen Bender. “You always do the right thing by everyone in your life. I so admire your strength—you have been a rock for so many. It’s no surprise that you are beloved by all who know you.”

Hollister was instrumental in the planning of the Law School’s Centennial Celebration in 2005, serving as co-chair of the event with Robert J. Reilly ’75, former Fordham Law assistant dean and assistant dean for the Feerick Center. Together, they worked for over a year leading up to celebration, planning special events to mark the historic occasion, including the opening reception at Gotham Hall and closing ceremonies at Ellis Island—a fitting location given the Law School’s commitment to serving others. Nearly 1,000 Law School alumni were ferried to Ellis Island for a black-tie gala, which included cocktails, dinner, entertainment, video presentations, and fireworks over the Hudson River.

“Gail was the voice of calm and reason,” Reilly said. “She could bring order out of chaos in situations involving all sorts of combinations of students, faculty, University officials and staff—and everyone felt that they had been listened to, and their position vindicated.”

Upon her retirement in 2017, Hollister reflected on how there were only six other women in her 1L year compared to the 211 women enrolled in the 1L class in 2017. She also noted the stark administrative changes that took place in the 50 years since she walked the Law School’s hallways as a student. Fordham Law, she recalled, had since added three associate deans and launched departments for alumni, administration and finance, career planning, clinical education, communications, development, graduate programs, information technology, international and non-J.D. programs, and student affairs.

“Although these changes were, in many ways, transformative, the heart of the Law School has not changed, and that is why this is such a special place,” Hollister said prior to her retirement. “Fordham Law always has been dedicated to being a place in which everyone continues to learn and we all thrive in a community that values each of us.”

Matthew Diller and Gail Hollister in 2016

In another interview prior to the retirement celebration, Hollister praised how the Fordham Law family truly exemplified the Law School’s motto, “In the Service of Others”: “How wonderful it is to work in a place that values community and relationships between faculty, students, and staff,” she said in 2016. “That’s what makes this place so special to me and a lot of other people.”

Professor Hollister’s service to others was not limited to the Law School. Following her retirement from full time faculty she was appointed to and served as a hearing officer for the 9/11 Victims Compensation Fund created by Congress.

Arrangements for a celebration of life gathering have not yet been announced, but will be shared with the Fordham Law community once available.

In lieu of flowers the family kindly suggests donations in Professor Gail Hollister’s memory be made to The Feerick Center for Social Justice at Fordham Law School.

Gail Hollister with her husband, Edward G. Williams, and her son, Gregory P. Williams, in 2016 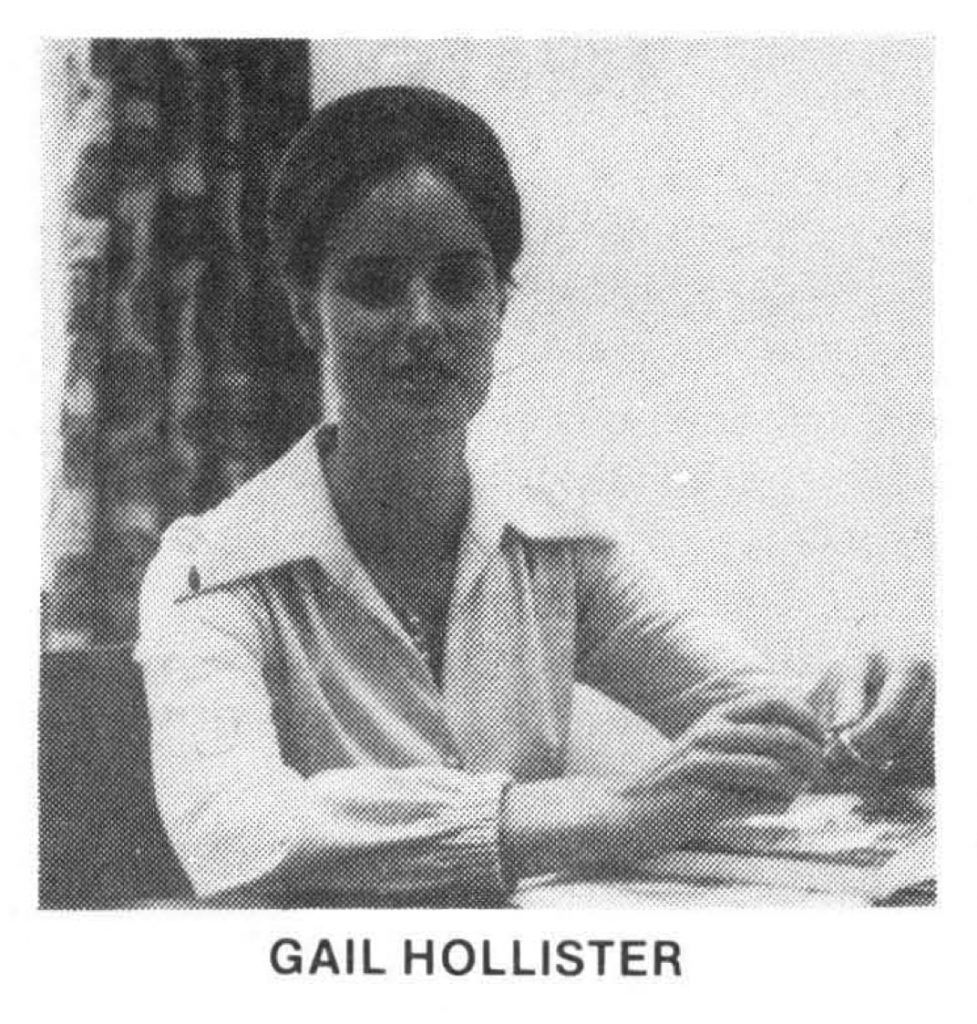 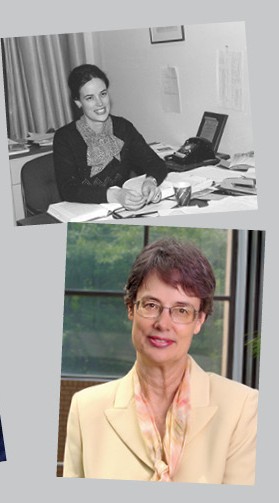 Professor Gail Hollister and her family in 2016