Rutman’s note, “Civics in Yiddish: State Regulation of Language of Instruction in New York’s Private Schools,” explores the tension between non-English language instruction in New York City private schools and state regulation over educational standards. It will be published in the Fordham Urban Law Journal in fall 2021. 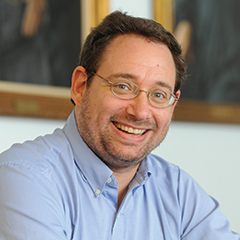 In 2020, shortly after Rutman had been selected for the Fordham Urban Law Journal for the upcoming school year, he heard a podcast discussing the book Religious Liberty in Education: A Case Study of Yeshivas vs New York, to which Fordham Law Professor Aaron Saiger contributed.

After hearing the podcast, Rutman reached out to Saiger to discuss the subject. That conversation led to Rutman writing his article during an independent study with Saiger in the fall of 2020. “I reached out to him cold,” says Rutman, who had not previously studied under Saiger or even met him. “He was absolutely essential for this project. I really couldn’t have completed it without his help.”

Rutman’s note discusses yeshivas (certain Orthodox Jewish private schools) and other private schools that conduct instruction in languages other than English. New York law requires the quality of private education to be “substantially equivalent” to the quality of public schools. A New York State Education Department regulation proposed to enforce the “substantial equivalence” standard would require that secular subjects, like math and history, be taught in English.

Rutman’s article concludes that requiring such “ordinary school subjects” to be taught in English at private religious institutions oversteps Constitutional bounds and is not an appropriate way to address the state’s concern with educating children to be competent in the English language.

According to Saiger, “It’s not at all clear to what extent the government constitutionally can regulate the language of instruction in private schools. I was so pleased that Stephen undertook to shed light on this important and difficult question, one that I have struggled with in my own work. The prize is richly deserved.”

According to Rutman, “There was sort of a broader tension that I was exploring that comes up in a lot of different ways in American society about creating a unified American polity versus a pluralistic one where lots of communities can operate in distinctive ways and sort of do their own thing.” He says the New York law continues to be a “live controversy,” with New York City mayoral candidates weighing in on the subject. Rutman said the pandemic has also drawn attention to religious liberty issues in education as some religious communities have adopted homeschooling as an alternative to remote public schools.

According to the Program on Church, State & Society website, dozens of law students entered the competition, and Rutman was awarded $4,000 for the winning article.

Rutman plans to donate a portion of the prize to charity. “I was very gratified to have been chosen but I felt I was able to be in a position to give some portion of the proceeds away, especially in this past year, which I think has caused a lot of financial hardship for so many in so many different ways,” he notes. Given Saiger’s guidance on the article, Rutman says he would like to donate to an education-related charity that is meaningful to Saiger, who also brought the competition to Rutman’s attention.