Return to Fordham Law School
You are at:Home»Alumni»Fordham Law Mourns the Loss of Judge Cornelius Blackshear ’77

The Fordham Law community is mourning the passing of Judge Cornelius Blackshear ’77, who died on June 10 at the age of 81 after a long struggle with a stroke-related illness. He is survived by his wife, Betty, his sons Adam, Michael, Gregory, Kevin, and Edjuan, his sister, Rosemary Blackshear Hill, his brother, Luther Blackshear, his brother-in-law, Jesse Hill, his sister-in-law, Barbara Blackshear, and a host of cousins, nieces, nephews, grandchildren, and other loved ones.

“Cornelius Blackshear’s life was one of service—to our City through his work on the police force, to our nation through his service on the bench, and to our school, where he was a leader among our alumni and a champion of diversity,” said Dean Matthew Diller. “We will miss him greatly and are grateful for all that he did to move Fordham Law forward.”

While serving on the force, Blackshear enrolled as an evening student at Fordham Law School. He served as president of the Black Students Law Association (BLSA) and pursued the development and participation of programs designed to increase enrollment and retention of minority law students. He received his J.D. from Fordham in 1977. 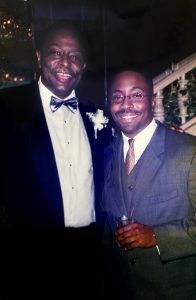 Blackshear was honored by BLSA in 1981 with the Ruth Whitehead Whaley Award and in 2017 with a Lifetime Achievement Award. In recognition of his contributions to the Law School and for his commitment to public service, he was presented with the Dean’s Medal of Recognition in 1988.

“When I started as dean in 1982, the percentage of African American students at the school was quite low,” said Dean Emeritus and Norris Professor of Law John D. Feerick ’61. “We had many challenges and a major one for me was helping build the diversity and inclusiveness of the School and to advance Fordham as an institution in the service of others. I assembled a small group of our graduates—Latino, Asian, and African American—to help me, and he came to my attention as a young bankruptcy judge. Beginning then and continuing for the next 20 years, he contributed enormously to the school by coming to meetings in the evenings, and sometimes on the weekend, offering suggestions and ideas as to our building a diverse population while at the same time modeling, as he did, the value of public service as he grew in stature as a federal bankruptcy judge. Judge Blackshear helped us greatly in turning us toward the North Star of diversity.”

“I found him among the most devoted of graduates to the School and its future,” Feerick added. “He was for me a prince of a person to whom I am greatly indebted for his help in achieving for the school at the turn of the century honors and a top leadership position among American law schools in its diversity and inclusiveness. He was truly a good person who served Fordham, justice, and humanity in a dignified, compassionate, and highly acclaimed manner. He was one in a million. May he rest in peace.”

A dedicated alumnus, Blackshear served as a member of board of directors of the Fordham Law Alumni Association (FLAA) and as a member of Fordham Law School’s Advisory Committee on Minority Affairs. He also served as a vice-chair of the Law School’s 75th Anniversary Celebration, which took place on May 21, 1987. In addition, he taught bankruptcy courses as an adjunct professor and served annually as a moot court judge.

“I remember the judge well,” said James Tolan ’62. “When I was president of the FLAA, I had the good fortune to interact with him when we asked him to chair the annual luncheon. Judge Blackshear was the consummate gentleman, always gentle and kind with a generous spirit. He possessed a soft and clear voice and was a fantastic master of ceremonies. In fact, as memory serves me, he demonstrated such respect for the position and the audience of his fellow alumni that he dressed in black tie. He was a good and decent man who burnished the Fordham star whatever he did and wherever he went.”

“My father prepared me for life, and I am blessed to be where I am today,” said Blackshear. “The one thing that I’ve learned from my father and why I’m involved in Fordham and my community, is that it’s about service and paying it forward. And so, I’ve had a blessed life. But it was my father that has given me the foundation to have that blessed life. His legacy endures … his story is still being written.” 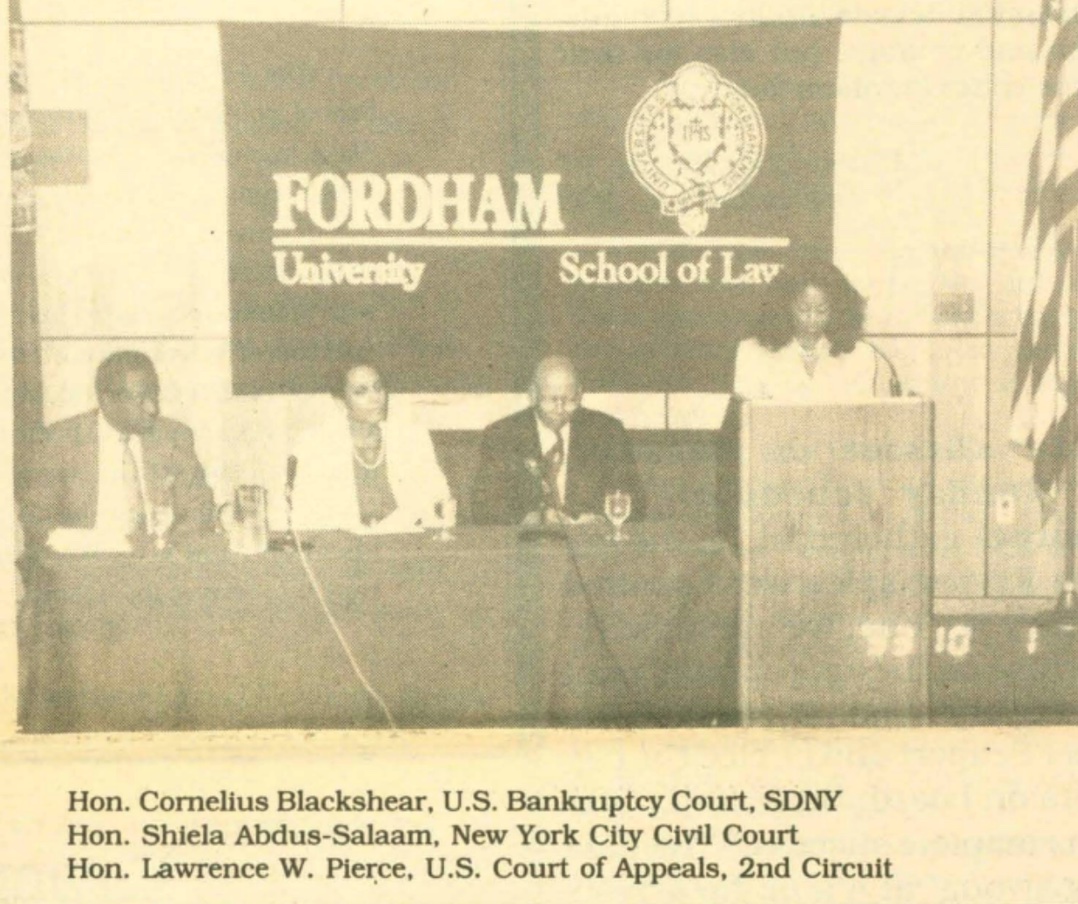 In 1979, just two years after graduating from Fordham, Blackshear was appointed as an assistant U.S. trustee for the Southern District of New York (SDNY). Four years later, in 1983, he became the first African American to be appointed as a U.S. trustee. In that role, he drafted the U.S. trustees handbook, and the office became a model for launching the U.S. trustees program—then a pilot program—nationwide.

The capstone of Blackshear’s career came in 1985 when he was appointed as a U.S. Bankruptcy Judge for the Southern District of New York.

“Mr. Blackshear is an example for us all,” said U.S. Attorney General William French Smith at the time of Blackshear’s judicial appointment. “During Neil’s tenure as the United States Trustee for the Southern District of New York, he was responsible for the supervision of some of the largest cases before the bankruptcy court. He has received substantial recognition for his achievement of rebuilding an understated office, which was suffering from low morale while, simultaneously, supervising the exceptionally complex Johns-Manville chapter 11 reorganization proceedings.”

Blackshear presided over many of the largest federal bankruptcies before the SDNY during the 1980s and 1990’s. These include Pan Am, Alexander’s Department Stores, 47th Street Photo, Inc., McCrory Corp., Laventhol & Horvath, Gaston & Snow, Integrated Resources, Inc., The Wiz, Federated Department Stores, and Iridium Spiegel, among others. He also presided over high-profile bankruptcy filings by Bernhard Goetz and LaToya Jackson. Notably, Blackshear handled the individual chapter 11 of Eli Jacobs, the majority owner of the Baltimore Orioles baseball team. Even though Jacobs owned less than 100 percent of the team, Blackshear brokered an agreement among the other owners that the Orioles would be sold in a bankruptcy sale before him. “He then presided over the sale of the team in bankruptcy, which was unprecedented at the time,” said John P. Campo, partner, bankruptcy and reorganization, at Akerman and a longtime colleague of Blackshear. “I had the distinct privilege of working both for and alongside Judge Blackshear in the office of the U.S. Trustee, appearing before him on the bankruptcy bench, and working alongside him again in private practice after he retired from the bench.”

“Judge Blackshear had a big heart,” said Chief Judge Cecelia G. Morris, U.S. Bankruptcy Court, SDNY. “He was willing to give his time to so many different people. He was deeply engaged with all the people who came before him in court, and he was gracious and kind to everybody at the courthouse. He was very popular with all the court’s employees. He was always encouraging people to be bold and to strive to attain challenging goals. He was a delightful person.”

In addition to teaching at Fordham Law School, Blackshear lectured on criminal justice at colleges and law schools and shared his valuable time as a speaker at numerous bankruptcy seminars. He served as an adjunct professor at City University of New York Law School as well as New York City Technical College. He also instructed the Bankruptcy Clerk’s Office on bankruptcy. Additionally, Blackshear participated in numerous panel discussions dealing with various aspects of bankruptcy law. His other activities included serving as chairman of the Scholarship Committee 7 for the Macon B. Allen Black Bar Association, writer for the Board of Contributors of The Bankruptcy Strategist, contributing author to “Bankruptcy Practice and Strategy,” and he was appointed by Chief Justice William H. Rehnquist to the Committee on Court Security for The Federal Judicial Conference of the United states. In 2001, he was appointed a member of the Administrative Office of the U.S. Courts’ Bankruptcy Judges Advisory Group and in 2002, to their Bankruptcy Court Advisory Council.

Blackshear stepped down from the bench in 2005 and joined the firm of LeBoeuf, Lamb, Greene & MacRae LLP as senior counsel. He retired from the practice of law at the end of 2006.

In 2009, the National Conference of Bankruptcy Judges named its minority fellowship program in honor of Blackshear. The Honorable Cornelius Blackshear Fellowship Program provides an annual stipend/scholarship for up to three minority attorneys to attend its annual meeting each year.

During his career, Blackshear received numerous awards and recognitions. Among them are: the “Special Achievement Award,” by the Department of Justice (1980); the “Executive Office of the United States Trustee’s Award” (1985); the National Organization of Black Law Enforcement Executives New York Chapter’s “Lloyd George Sealy Award” (1986); the “John Jay College of Criminal Justice 1987 “Alumnus of the Year Award”; the “Dean’s Medal of Recognition,” from Fordham Law School in 1988; the John Jay College of Criminal Justice “Fourth Annual Lloyd G. Sealy lecture African American in the Judicial System Award” (1990). In October 1990, he received an award from the Macon B. Allen Black Bar Association; he received the “Ellis Island Medal of Honor” on May 6, 2002; in June 2003, Blackshear received the New York Institute of Credit’s “Leadership in Education Award”; and The National Bar Association Bankruptcy Law Section honored Blackshear during a special gala awards dinner and ceremony in 2004.

A viewing will be held on June 16 at Williams Funeral Home, 2945 Old Tobacco Road, Hephzibah, Georgia.

The family has asked that donations be made in honor of Judge Blackshear to the American Stroke Association.