Cristel Taveras FCLC ’14, LAW ’25 has been named a member of the inaugural class of scholars in the When There Are Nine Scholarship Project.

The project was named in memory of the response that the late U.S. Supreme Court Associate Justice Ruth Bader Ginsburg gave in 2015 when people asked her when she thought there would be “enough” women serving on the Supreme Court. “When there are nine,” she replied nonchalantly. The program aims to honor the legacy of Ginsburg by furthering her commitment to expanding career opportunities for women in the law and promoting equity and diversity in the legal profession.

“As a former paralegal of the ACLU (American Civil Liberties Union) Women’s Rights Project—a project that Ginsburg herself co-founded—I am in many ways inspired by the creativity of her legal mind,” explained Taveras, “particularly her occasional and clever use of male plaintiffs in equal protection cases to demonstrate that sex-based distinctions harm men and women.”

Taveras, a lifelong New Yorker and daughter of immigrants, said she was overjoyed and felt honored upon learning she had been selected to be part of the new program, which was established last September by alumnae of the U.S. Attorney’s Office for the Southern District of New York (SDNY), in partnership with the Federal Bar Council and Federal Bar Foundation.

“This generous scholarship will allow me the opportunity to pursue a career in public interest without a debt burden that too often dissuades public service-oriented attorneys,” Taveras said. 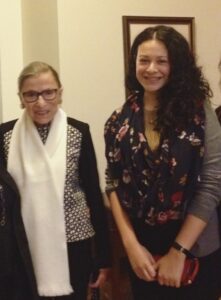 Since graduating from Fordham University in 2014, Taveras has worked in different roles with the goal of advancing equity and justice through an intersectional lens. After working at the ACLU, she served as a policy advisor with the New York City Board of Correction and is currently a campaign researcher at Color Of Change, the nation’s largest online racial justice organization. In addition to her extensive public interest work, Taveras previously volunteered with Metropolitan Council on Housing, a local housing justice organization, and served as a mentor to a first-generation high school student.

Taveras joins three other first-year law students from Yale Law, Stanford Law, and Columbia Law, who were selected from a pool of approximately 385 applicants based on their academic achievements, commitment to serving communities, and for their perseverance in the face of adversity—all character traits embodied by the late Justice Ginsburg.

Former U.S. Attorney for SDNY and a founding donor to “When There Are Nine” Preet Bharara—who delivered a keynote address at Fordham Law in 2015 and discussed challenges to democracy with Dean Matthew Diller in 2019—explained that he and his colleagues realized that expanding opportunities for women in the law requires more than just financial assistance. “Perhaps the greatest part of this project is that each scholarship recipient will be provided a team of mentors to give career guidance and create networking opportunities,” he said.

“In this way,” Bharara continued, “my colleagues hope to open doors for the next generation of women lawyers with the help of their close-knit SDNY alumnae community and to give thanks for the doors that Justice Ginsburg opened for them.”

That opportunity for mentorship is what drew Taveras to apply for the program.

“As a first-generation law student, I am grateful to have When There Are Nine’s encouragement, guidance, and support throughout law school,” Taveras said. “There’s so much I don’t know about the legal profession and it’s great to know that I now have a group of people behind me, rooting for me, and willing to answer any questions that may come up throughout law school and beyond.”

Karen Patton Seymour, partner at Sullivan & Cromwell and another founding donor to “When There Are Nine,” added that the benefits of participating as a mentor are twofold. “This is an opportunity for those of us who have had the privilege of serving as federal prosecutors to not only pay it forward, but also mentor the deserving recipients to help ensure their success,” she said.

Taveras said she is looking forward to interacting with and learning from the other awardees and other legal practitioners through the project’s mentorship and professional development programming. She also hopes to embody Ginsburg’s spirit during her time at Fordham Law by remaining attentive to the many ways the law can be further advanced to protect all people’s rights across the country.