Dean Emeritus and Norris Professor of Law John D. Feerick ’61 added yet another honor to his illustrious list of accolades—a doctorate of laws honoris causa from University College Dublin (UCD). The honorary degree was bestowed upon Feerick on June 14 in recognition of his outstanding contributions to the American legal field.

Feerick, 85, said he was overcome with emotion upon receiving the invitation from UCD, and thought of his late parents who hailed from County Mayo. “I am overwhelmed and humbled by this high honor, for which I feel unworthy,” Feerick said. “I consider this honorary degree as a capstone recognition that would have astonished my parents, as it does me.”

Professor Imelda Maher, former dean of law at UCD, delivered an inspiring citation at the conferring ceremony, calling Feerick “one of the few scholars whose academic writing has been significant in securing constitutional change, and whose books on the process provide a fascinating insight into the interplay of legal change and the politics that affect it.” She also spoke of how Feerick’s memoir, That Further Shore: A Memoir of Irish Roots and American Promise, “shows the pain, challenges, and opportunities of migration and how enriching it can become for both the society left and the society embraced.” 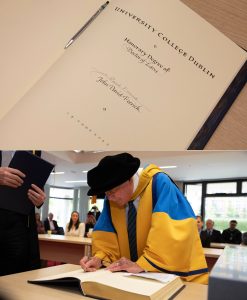 Maher highlighted, among other things, Feerick’s scholarship that led to the drafting of the U.S. Constitution’s Twenty-Fifth Amendment and his involvement in bringing together the major law schools in Northern Ireland and the Republic of Ireland for the first time in history in the late 1990s—with Fordham Law serving as the bridge.

During his tenure as dean of Fordham Law, Feerick joined then-President Bill Clinton and a group of nearly 40 academic and business leaders on the first-ever presidential visit to Northern Ireland in November 1995—a seminal moment in the peace process that culminated in the Belfast/Good Friday Agreement, which was reached on April 10, 1998. Feeerick formed the Fordham-Ulster Conflict Resolution Program alongside Professor Jacqueline Nolan-Haley and with the support of former Queen’s University Belfast School of Law Dean John Jackson and former UCD Sutherland School of Law Dean Paul O’Connor. The spirit of the Fordham-Ulster Conflict Resolution Program lives on in the Law School’s popular Belfast-Dublin Program, which allows select students from all three law schools to take classes together in Belfast and Dublin every summer. More than 700 Fordham Law students have participated in the program over the last 21 years. 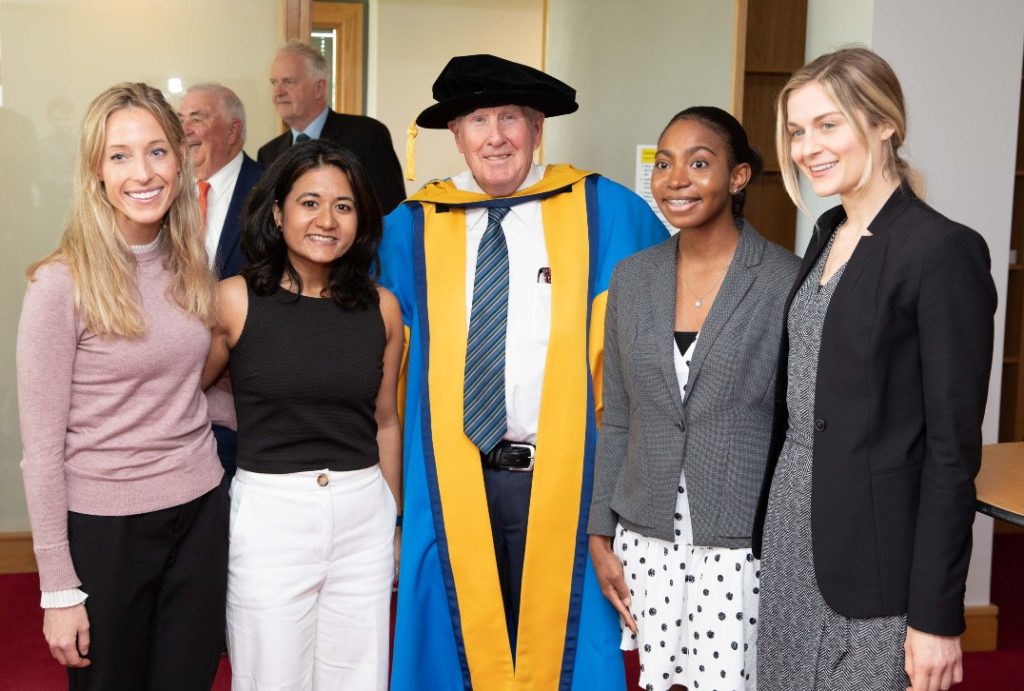 Feerick’s family and friends from Ireland, UCD faculty, members of the judiciary, and students from Fordham Law School, Queen’s University Belfast, and UCD Sutherland School of Law were in attendance at the conferral ceremony.

“I will cherish this honorary degree and promise always, with whatever energy I have, to contribute to a greater peace in Northern Ireland and the Republic so that the children and grandchildren of this generation will have the same opportunities as the children of my parents had,” Feerick said.