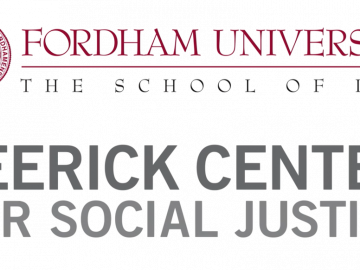 The Feerick Center for Social Justice is hosting McGregor Smyth, Executive Director of New York Lawyers for the Public Interest, as part of its Social Justice Luncheon Speaker Series.  The topic will be Fighting Discrimination in Healthcare in 2018.  The Urban Law Journal is a co-sponsor of the event.

Pizza will be served.

Flourishing Families in Context: A New Lens for Urban Law

The Cooper-Walsh Colloquium is a forum for legal scholars to discuss ideas and share informed critiques on legal, economic, and social issues affecting urban areas. The Colloquium is organized in conjunction with Professor Susan Block-Lieb, the Cooper Family Chair of Urban Legal Studies, and Professor Sheila Foster, the Albert A. Walsh Professor of Real Estate, Land Use, and Property Law. The event is co-sponsored by the Fordham Urban Law Center. It consists of five paper presentations and five accompanying responses that serve as a workshop for the main papers and facilitate open discussion among the panel and Colloquium attendees. Articles and responses developed at this year’s Colloquium will be published in the Cooper-Walsh Issue of the Journal in Spring 2016.

This year, the Fordham Urban Law Journal is dedicating its eighth annual Cooper-Walsh Colloquium to the exploration of urban issues through a family law lens. Organized in collaboration with Dean Clare Huntington, Fordham Law Associate Dean for Research and author of Failure to Flourish: How Law Undermines Family Relationships, the Colloquium will examine how federal, state, and local laws regarding such issues as education, employment, housing policy, land use, and household composition shape family life. The event will also identify and assess potential reforms intended to remedy the law’s shortcomings and to improve family wellbeing.

9:50 – 10:00am WELCOME and INTRODUCTION
Dean Matthew Diller, Dean of Fordham University School of Law and Paul Fuller Professor of Law

10:20 – 11:10am Sex in the City by PROFESSOR SEAN H. WILLIAMS
Following Clare Huntington’s lead, this Article explores the intersection of family law and local government law. In it, I argue for a radically expanded role of local government in the dispute-resolution function of family law.  As Huntington argues, there are numerous ways in which localities can already influence families—for example, through zoning and public schools.  This Article highlights the surprising array of advantages that stem from allowing a more direct and formal version of local family law.  More specifically, local ordinances could weigh in on issues surrounding child custody, spousal support, and other issues that commonly appear in divorce proceedings.  The current state-run dispute-resolution process promotes acrimony.  One of the main ways it does so is by asking judges to use impossibly open-ended standards to decide cases.  This fuels each party’s over-optimism and provides them with ample space to mount plausible attacks on each other during the divorce.  Most reform efforts of the past decade—Huntington’s included—seek to move away from open-ended standards and toward clearer rules.  But states have repeatedly declined invitations to make family law more rule-like.  Local governments, by contrast, are much more likely to embrace these reforms, in part because they draw from a more homogeneous base of voters.  This means that instead of having to frame every reform in language that will appeal to both “red” and “blue” voters, localities can pursue more partisan reforms.  In many cases it is the mere existence of a rule, rather than its content, that will substantially reduce litigation and its accompanying acrimony.  Of course, even if local rules reduce harmful litigation, their content might be objectionable on other grounds.  We might be hesitant to allow localities to influence child custody if we feared that they would use that power to discriminate against some persons or couples.  But this fear is unwarranted.  To illustrate the existing barriers to local minority oppression, I will consider a hypothetical locality that wishes to discriminate against gay parents and same sex couples in a post-Obergefell world.  It turns out that legislative discrimination (through local ordinance) is much more difficult to achieve than judicial discrimination, which can lie under the cloak of open-ended standards.   While express local legislative influence over family law is far from perfect, it is a vast improvement over the current system.

11:20am – 12:10pm Households and Families by PROFESSOR KATHARINE B. SILBAUGH
For all of its modernization, family law still separates two relationships—marriage and parenthood—from all others. While step-parents, foster parents, unmarried partners, cohabitants, grandparents, and similar relationships at times become legally relevant for distinct and limited purposes, only the two core legal statuses, marriage and parenthood, enjoy (or are burdened by) genuinely difficult to dislodge rights and obligations across a wide spectrum of private and public law. Where other relationships might be tied with string, marriage and parenthood are tied with steel cable in the law. At the same time, these relationships have a much less meaningful role in delineating households than many would imagine. Only a small proportion of households contain only people who are bound by these legal ties. The majority of households either contain neither of these ties, or they contain a pairing of individuals not bound by either, even if they also contain one of the two ties. That is to say, a household that contains strong-form legal family members, but only strong-form legal family members, isn’t a normal household. In contrast to family ties, individuals held together by their housing have a wider array of time frames, needs, and intentions surrounding their bonds. Where households are defined by the U.S. Census and by various public law programs in terms of residents, the definition of household and definition of legal family don’t provide much assistance to one another. This article will consider several implications of the divergence between family boundary and household boundary, particularly as it relates to the design of housing and the household production function. Does housing aim to meet the needs of families, or of households, and does anything about the difference matter for planners?

1:20 – 2:10pm   Urban Policy and Families: How Concerns about Order Contribute to Familial Disorder by DR. RAPHAEL BOSTIC
Urban policies are often enacted with the goal of maintaining social order in a given domain. However, because domains rarely operate in isolation, efforts to maintain order along one dimension can exacerbate conditions and increase disorder in others. Families, particularly those with low incomes, often live at the intersection of these conflicting forces and are left with few options for making true progress. This article examines this dynamic through the lens of housing policy. It documents how housing policy can make conditions more difficult for families, and offers proposals for mitigating these negative effects while preserving the original motivation for the policy.

2:20 – 3:10pm     Gender and the Family in the Sharing Economy by PROFESSOR NAOMI SCHOENBAUM
While the sharing economy has been celebrated as a flexible alternative to traditional employment for those with family responsibilities, especially women, the sharing economy presents challenges for gender equality.  Many of the services that are “shared” take place in the context of intimacy, enhancing incentives to discriminate on the part of both the worker and the customer, complicating longstanding ideals of equality in the context of work and the provision of services. And the flexibility for which the sharing economy is praised may simply replicate longstanding forms of inequality that go along with these more flexible forms of work.  Expanding on previous research on intimate work—a critical area that exists largely in limbo between the law of work and the law of family—this Article explores these challenges and the implications for the regulation of the sharing economy.

3:20 – 4:10pm   Nurturing Free Citizens by PROFESSOR PEGGY COOPER DAVIS
This article will address the social need for family protection in order to assure child protection.  Considering supports such as New York City’s free pre-K, child and family support systems on the Reggio Emilio model, and the French Ecoles Maternales, this paper will suggest measures cities might take in support of healthy childrearing and the socialization of an engaged citizenry.

✨ Meet the ULJ Board ✨ Abby Kucharczyk — No

RSVP link in bio! Climate change has been, and w