Return to Fordham Law School
You are at:Home»Blog»The 20th Annual A. A. Sommer, Jr. Lecture on Corporate Securities and Financial Law 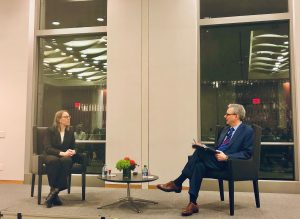 On November 14, 2019, Fordham University School of Law, in conjunction with Morgan Lewis & Bockius LLP, held their annual A.A. Sommer, Jr. Lecture on Corporate, Securities and Financial Law. This year’s lecture featured a conversation as Hester M. Peirce, a Commissioner of the U.S. Securities and Exchange Commission (SEC), was interviewed by Ben A. Indek, a partner at Morgan Lewis.  The night began with a welcome from Fordham Professor Richard Squire, Director of Fordham’s Corporate Law Center, who discussed Fordham’s business law courses, clinics and the Journal of Corporate and Financial Law. Afterward, Susan Resley, a partner at Morgan Lewis, detailed Mr. Sommer’s extensive career at Morgan Lewis and the SEC and welcomed the multiple members of Mr. Sommer’s family that were in attendance. She then gave a warm introduction to Commissioner Peirce.

Mr. Indek began the conversation with a discussion about the role of regulation in financial markets. Commissioner Peirce spoke about her role and vision for the future of regulations, highlighting some of the challenges currently facing the SEC. One such challenge was how to regulate and enforce for those that intentionally violate the SEC’s regulatory framework versus those who do so unintentionally. Commissioner Peirce cautioned against placing too much emphasis on numbers and data regarding how many SEC enforcement actions were brought in a year as opposed to focusing on the substantive value of enforcement actions. The discussion then turned to areas for the SEC to potentially focus on in the future. Commissioner Peirce’s chief suggestion was to update some of the SEC’s outdated rules to better regulate in the digital age. Subsequently, this led to a conversation about the SEC’s role in modern investing, specifically cryptocurrency. Commissioner Peirce, affectionately known as “Crypto Mom,” discussed what she felt was a need for stronger SEC guidance around regulation of this innovative technology, as the lack of definitive answers makes it difficult for individuals to know whether they are in compliance. The last topic touched upon was what Commissioner Peirce referred to as the “secret law” problem, which developed as a result of private firms soliciting guidance from SEC staff. The issue is that such guidance has the effect of law, thus holding people and firms to rules that cannot be read on the books. At this point, questions were heard from the audience and the lecture concluded with a cocktail reception.