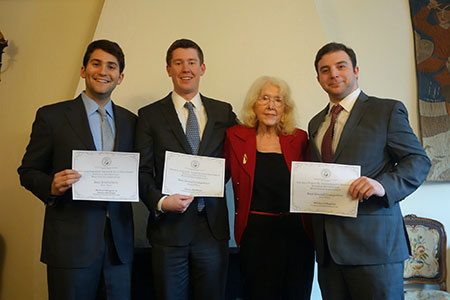 In the GW Competition, a team limited to two members must write two briefs, one for each side. The case dealt with an employee of a private company that had a contract with the National Security Agency, who was charged with transmitting classified information relating to the national defense to a member of Congress, in violation of the Espionage Act. Armed American security agents captured the employee in a foreign country and interrogated him at length without giving him Miranda warnings while en route to the United States to face criminal charges.

The legal issues involved the following: 1) whether the court had jurisdiction over the employee and whether his un-Mirandized statements were admissible against him and 2) whether application of the Espionage Act to the conduct alleged presented a violation of the employee’s First and Fifth Amendment rights.

The judges for the final round of the competition were Hon. John Bates, United States District Court Judge; Brigadier General Richard Gross, Legal Counsel to the Chairman of the Joint Chiefs of Staff; and George Peirce, General Counsel of the Defense Intelligence Agency.

Professor Maria L. Marcus, the team’s faculty coach, said, “The team members wrote two extraordinary briefs that were the best in the competition. Then they cheerfully dominated the field orally as well. They excelled as multifaceted litigators.”